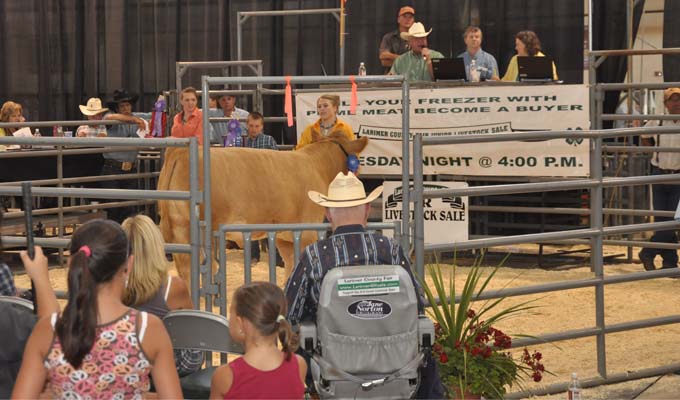 [1]
A view of the sale arena as Danielle Mayer of Fort Collins shows her Grand Champion.

The 4H Livestock sale is the last official event of the county fair. The bidding is active and usually the final price is well above the market price of the livestock. The highest priced sale is usually the Grand Champion Market Beef, and the 2010 Larimer County Fair was no exception as that heifer brought $6,000 for Danielle Mayer of Fort Collins. The Reserve Champion Market Beef, raised by Berthoud’s Cory Ellis brought $2,600. The same relationship held in the sheep as Kristina Cavey’s Champion Dorsett brought a bid of $2,000 and Kaylee Daugherty’s Reserve Champion brought $1,000.

The fair rules require that the animals be sold. Most exhibiters show several animals, but are normally limited to only one animal per individual. Berthoud 4-Hers sold 29 of the 201 head of livestock and poultry put on the block this year.  With 200 entries, the sale took six hours to complete, but the air remained festive to the end.

The table following shows the successful bid for the livestock exclusive of add-ons. Add-ons are extra amounts donated by supporters of the program and vary from $25 to several hundred dollars and constitute a significant and important part of the money the kids receive for their livestock.

As always, the sale may be a bittersweet moment for the kids as they see their charge for the last time as they leave the sale ring. Most seem to understand that this is what raising livestock is about

This article which includes Berthoud youth appeared in the August 12 edition of the Loveland Reporter-Herald, “Finding the good in goobye [2].”