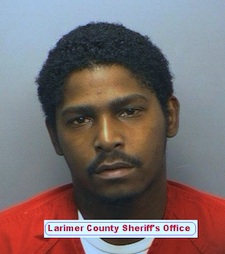 On December 19 a routine task turned violent. A deputy in the high security area of the jail was handing out clean laundry when he was attacked. During the laundry exchange, Thomas went to the exit door and demanded to be released. The deputy ordered Thomas to return to his cell. As the deputy stood talking to Thomas, he suddenly punched the deputy in the face. The deputy immediately drew his Taser and ordered Thomas to return to his cell. At that point Thomas complied and returned to his cell.

The deputy sustained a minor injury, but did not have to go to the hospital. Thomas was not touched.

Thomas has previously been charged with two other assaults on jail deputies, one in October of this year and the other in March of 2009.

This was the second incident in a month in the high security area of the jail. On November 20, 2011, four inmates caused a major disturbance which resulted in them being charged with Rioting in a Detention Facility. It was the second attack on a Larimer County Sheriff’s Office deputy in less than a week. A Patrol deputy was attacked by a motorist on December 15, 2011.

Jail Administrator Captain Tim Palmer said, “As our alternative sentencing programs are utilized more to decrease costs and reduce recidivism, we are left with more of the serious offenders with violent tendencies who do not qualify for these programs.”