In the world of sports, the term “clutch” is reserved for those rare athletes who raise their game to highest levels in the most pressure-packed situations. This past week, Berthoud High guard Kendall Baker has been the epitome of a clutch player for the Lady Spartans basketball team.

In the opening round of the Patriot League district tournament on Tuesday, Baker scored 12 of Berthoud’s 16 fourth quarter points to give the Lady Spartans a 43-32 win over University. As if Tuesday’s standout performance was not enough, Baker built upon her ever-growing basketball resume on Saturday afternoon’s third-place game against Valley. The sophomore guard demonstrated poise beyond her years as she drove the length of the court to sink a game-winning basket that gave Berthoud a 39-37 win at UNC’s Butler-Hancock Hall in Greeley. 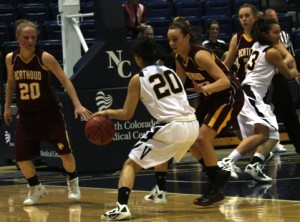 As the Lady Spartans clung to a late 37-36 lead, Valley took what could have been the final possession of the game. Vikings junior Haley Hutton drove inside and drew a foul with only seven-and-a-half seconds remaining in regulation. Hutton sank her first free-throw to knot the game at 37.

Berthoud Head Coach Randy Earl promptly called timeout and drew up a play he and his team hoped – regardless of whether or not Hutton made good her second free-throw attempt – would give the Lady Spartans a chance to win the game on the final possession.

Haley’s second free-throw bounced off the rim and Berthoud recovered the rebound. An outlet pass to Baker, as designed, afforded the sophomore an open floor to navigate her way around the Vikings’ transition defense as time ticked off the clock. Baker quickly made her way to about a quarter of the way down the key on the right side, stopped and fired a quick jumper for a perfect swish and a 39-37 Berthoud win.

“You know seven seconds is a long time in basketball and that’s plenty of time to get down the court, my worst worry was getting the basket, you know. I think they were expecting us to shoot a three or something because they let me have the lane….but it worked out well, my team played hard,” was how an exuberant Baker described the game-winning play.

Coach Earl explained that it was decided to put the ball in the hands of his team’s go-to player and allow her an opportunity to win the game. “There was seven-and-a-half seconds left and (Baker) moves down the court pretty well so we thought she could take it all way, that’s what we talked about during the timeout…we just said get it to Kendall and let Kendall go,” Earl said after the game. 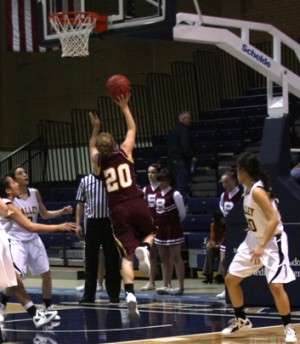 [2]
Kendall Baker goes in for a lay-up

The Lady Spartans had hung onto a tenuous lead throughout the first half, leading by two points after the first period and by five at halftime. The Vikings proved resilient, however, holding Berthoud without a bucket for more than eight minutes and eventually tying the game at 27 by the 7:06 mark in the fourth period.

Led by freshman Bridgette Hutton, who scored 11 of the Vikings’ 12 fourth-period points, Valley remained within striking distance for the remainder of the contest. Berthoud senior Dillon Fagler converted a three-point play to give the Lady Spartans a 35-32 lead with 3:38 left in the game. Key baskets in the fourth period from Baker, Taylor Bezanson and a trey from Hannah Haggas – who had missed nearly three-quarters of the game following a violent collision in the first period – were enough for Berthoud to get to the final seconds with a chance to win.

Baker and fellow-sophomore Samantha Kouns each hung 12 on the board to lead the Lady Spartans in scoring. Fagler added eight and, along with Bezanson and junior center Savanna Pauge, made major contributions to a Berthoud defense that held Valley well below their 47 point per game scoring average.

The win gives Berthoud a bronze medal in the the 3A Patriot League tourney. The Lady Spartans will begin competition in the state tournament next week; the specific date, time and opponent for said state playoff game will be announced shortly.