In my own career in the military and a degree in personnel management, I have been able to observe people in positions of authority. I have been able to ascertain that there is a big difference between managers and leaders. I have observed many competent managers but real leaders are few and far between. Leaders engender trust and loyalty because in addition to managing, they take care of their people. A reading of the D-Day invasion and landing at Omaha beach will illustrate this point. Soldiers will follow a leader into battle, but will shun following a manager. It has been my observation that Mitt Romney is no leader. In this campaign that capability lies with the current President of the United States. I found the following article at Alternet. It does a good job of explaining what I have observed. Editor

What Does Leadership Look Like? Business Experts Would Say Obama Not Romney [2]

Business columnists say there’s more to it than acting on TV. 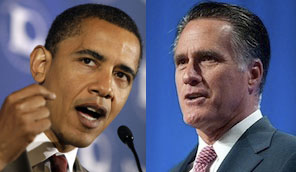 Are Americans electing a salesman-in-chief or commander-in-chief on November 6?

From the morning after analyses from sympathetic TV hosts—like MSNBC’s [5] Chris Matthews with ex- San Francisco Mayor Willie Brown and Salon’s Joan Walsh, to the recent Times polling [4]—one of the sad takeways is that style and appearance on TV matters more than standing by the facts and past stances.

As the presidential debates continue, the question of ‘what does leadership look like?’ looms large. This sounds trite, but it’s not. If you drill down into what corporate America’s advisors say is required of executives today, the only choice would not be [6]electing Romney—because he has few new ideas, isn’t offering a “new operating system,” and is more of a regressive than visionary figure.

But not everybody reads the business press on leadership today. Instead we have to start with a truth that liberals don’t like: that on TV, substance and facts take a back seat [7]to appearance and performance.