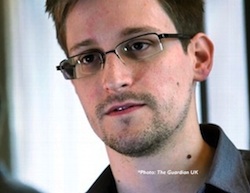 It’s true that, as Glenn Greenwald [3] and others [4] have written, the American media has focused attention on the supposed peccadillos of Edward Snowden so as not to have to spend too much time on the sweeping system of government surveillance he revealed. At least for now, the Obama administration has cornered [5] the document-less [6] whistleblower at Moscow’s international airport, leaving him nowhere on the planet to go, or at least no way to get there. As a result, the media can have a field day writing negative pieces about his relationship to Putin’s Russia.

So Greenwald certainly has a point, and yet it would be a mistake to ignore Snowden’s personal story.  After all, the unending spectacle of a superpower implacably tracking down a single man across the planet has its own educational value.  It’s been a little like watching one of thoseTransformers movies in which Megatron, the leader of the evil Decepticons, stomps around the globe smashing things, but somehow, time and again, misses his tiny human target.  In this strange drama, in a world in which few eyeball-gluing stories outlast the week in which they were born, almost alone and by a kind of miracle Snowden has managed to keep his story andthe story of the building of the first full-scale global surveillance state [7] going and going.  He seems a little like the Energizer Bunny of whistleblowers.

No matter what’s written about him here in the mainstream, the spectacle of a single remarkably articulate and self-confident individual outwitting the last superpower has been, in its own way, uplifting.  Although the first global polls haven’t come in, I think it’s safe to assume that from Bolivia to Hong Kong [8], Germany to Japan, Washington is taking a remarkable licking in the global opinion wars.  Even at home, we know that, among the young [9] in particular, opinion seems to be shifting [10] on both Snowden’s acts and the surveillance state whose architecture he revealed.

Given its utter tone-deafness and its flurry of threats against various foreign governments, the downing [11] of Bolivian President Evo Morales’s plane, and ever more ham-handed moves against Snowden himself, Washington is clearly building up a store of global anger and resentment, including over the way it’s scooping up private communications worldwide.  In the end, this twenty-first-century spectacle may truly make a difference. As Rebecca Solnit, TomDispatch regular [12] and author of the new book The Faraway Nearby [13], writes today, it’s been a moving show so far. One man against the machine: if you’ve ever been to the local multiplex, given such a scenario you can’t for a second doubt where global sympathies lie. Tom

Billions of us, from prime ministers to hackers, are watching a live espionage movie in which you are the protagonist and perhaps the sacrifice. Your way forward is clear to no one, least of all, I’m sure, you.

I fear for you; I think of you with a heavy heart. I imagine hiding you like Anne Frank. I imagine Hollywood movie magic in which a young lookalike would swap places with you and let you flee to safety — if there is any safety in this world of extreme rendition and extrajudicial execution by the government that you and I were born under and that you, until recently, served. I fear you may pay, if not with your death, with your life — with a life that can have no conventional outcome anytime soon, if ever. “Truth is coming, and it cannot be stopped,” you told us, and they are trying to stop you instead.

Political asylum is a weird idea: One country gets to tell another country: We think your criminal is actually a hero and he can come live here, so buzz off. Pretty annoying if you’re the country trying to get the criminal, and the U.S. is really pissed that some countries and human rights groups [16] are helping out NSA whistleblower Ed Snowden, currently holed up in Moscow’s airport, in his quest for asylum. After all, the U.S. would never think of shielding someone accused of illegally leaking another country’s classified information, right?

Ha ha, of course we would. Take the case of Swiss whistleblower … Read More [15]