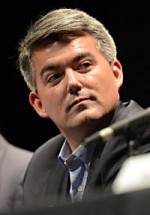 We need Cory Gardner as our U. S. Senator.  He’s been fighting for accountability for the federal government since he was first elected to congress, something we need now more then ever.  His bill for committees to hold yearly hearings to locate duplicate and unnecessary programs would result in cost savings and reduce the deficit.  Please vote for Cory Gardner for U. S. Senate.

I want to thank Cory Gardner for his service to Colorado and to the United States.  Cory wants a better America and I like what he is trying to do in politics.  Cory wants smart, talented people to run the federal government, but he does not want those smart, talented people to run our lives.  He feels that he has a duty to oppose programs that impose bureaucratic rule.  For example, Cory opposes Obamacare and the Dodd-Frank financial nightmare.  He feels that these laws cannot be reformed and restructured, but must be ended or, if we choose, replaced by something completely different and consistent with popular consent and self-government.  I want to also thank Cory for his attempt to work with both Republicans and Democrats.  That is tough job and we need more of it.

Gardner Represents the People of Colorado

As I sit here on the eve of the one-year anniversary of the devastating floods in Colorado, I pause in admiration for the people of Colorado – especially those most affected by the flooding. I recognize those also in Larimer County – those who lost so much in the High Park Fire in 2012 and those who lost so much in the flooding last year.  So many of you are still working toward restoring your lives as much as possible; some of you will never be able to get back to where you were before, but we pray for your full recovery.

When I heard then what Congressman Cory Gardner was doing here regionally, I took notice. Congressman Gardner surveyed the devastation first hand, listened to victims and called local representatives personally to ask how he could help upon his return to Washington. I gratefully recognized he was willing to fight for the people of Colorado that needed prompt and effective support. He worked with both sides of the aisle to funnel relief funds back home – Cory Gardner did the right thing then and wants to do the right thing in the future as your next Colorado Senator. Cory Gardner continues to fight for the people of Colorado that need to be effectively represented while he fights for us in Washington. Please join me in voting for Cory Gardner for Colorado Senator.

As a landowner in the Big Thompson Canyon who suffered a great deal of damage and have been active in recover efforts, I must say that I have never seen Cory Gardner in the area and have heard nothing that he did to help. I was at the disaster center when Senator Udall visited early on. I don’t know what he accomplished, but he did come.

Cory Gardener represents the oil companies and the Koch Brothers, not the people of Colorado, See Below.

Cory Gardener has been active in promoting the Keystone XL pipe line, claiming that it would create thousands of jobs in Colorado. That is simply not true. Here is the link to the fact check.

Why does he make such claims and why is he a climate change denier, this article explains:

Exposed: Corporate cash is the lifeblood of climate change denial on Capitol Hill [2]

Hint: They want to do away with Social Security, Medicare, all taxes, the postal service, compulsory education,  the FAA, FDA, EPA, DOT, DOE, Consumer Protection, OSHA and on and on. Basically the entire government except the military. If that is what you believe, then by all means vote for Cory Gardner.

In the latest, Gardner is stumping for a Sandy Hook shooting denier: