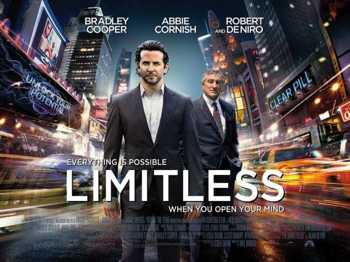 [1]Director Neil Burger’s Limitless is a movie of many strengths, creative filming, fast paced action and the story takes the viewer on a rollercoaster ride full of twists and turns. Even the soundtrack adds a great deal to the overall experience. With all these strengths it is easy to forgive its minor problems such as plot holes and Bradley Cooper’s less than inspiring acting.

Bradley Cooper [2] stars as Eddie Morra, a writer who is limited by writers block. Morra happens to run into his ex-wife’s brother who gives him a new medication called NZT that allows him to use 100% of his brain. This movie follows the myth that people use only 20% of their brain. The drug allows him to remember anything he has ever read or seen, and he comes up with solutions to problems and understands everything he looks at or hears without explanation. Morra finishes his book in four days, becomes cultured, learns languages in minutes and is successful in investing in the stock market with ease. But, then he gets cocky and starts forgetting the basics; such as forgetting to pay a Russian loan-shark for the $100,000 he borrowed, or planning for the time when he runs out of NZT. This is one of the plot holes that makes no sense because Morra should be able to find solutions to these problems since he is using 100% of his brain. Like any illicit drug, there is also a cost to Morra while using the drug. When off the drug Morra becomes sick, is plagued by headaches, and has even less intelligence than before he started using the drug.

Despite the few plot holes, the story is straightforward and has many interesting twists. Robert DeNiro plays a finance investor who gives Morra a job. DeNiro is such a powerful actor it is sad he does not have much screen time. Cooper too is a great actor; however it seems that he is not strong in this role. He was lacking in screen presence. This could come from working with DeNiro, an actor who has outstanding screen presences or it could be that the unusual filming aspects over-shadowed Cooper’s abilities. Cooper performs a great running narration during the film. The narration helps audiences understand what he is thinking while on the drug. The narration is also peppered with some brief humor which will make most people smile. Eddie Morra is a well-developed character and unlike most characters who gain power quickly, Morra is not corrupted; he is still a good guy. Greed does not take control, and he still is virtuous all the way to the end of the film.

The real star of the show is the filming and cinematography. When Morra is not taking the drug the movie has a gray and green filter applied which gives the movie the appearance it was filmed on an overcast day. While Morra is taking the drug colors ‘pop’ and every shot is filled with light. Early in the movie Morra starts to skip time, he winds-up in situations and places not knowing how he got there. The effect that is used to let audiences know this is happing is very interesting. Colors fade into light as the camera rushes from the place where Morra was before and after he skips time. Other interesting effects are letters of the alphabet raining around Morra while he writes his book. This intriguing style of filming is accompanied by a techno soundtrack which fits the movie perfectly.

The fight scenes are quick and fit into the abstract style of the movie. An especially unique scene is a fight that takes place in the New York City subway system. During the action, the scenes switchs to old kung fu movies that Morra watched as a child and then returns to the present as Morra recreates the moves from the kung fu films.

If you’re looking for a movie to go see, you should try Limitless.