Bringing science and math down to earth!

The guest speaker is Mike Roos, from Fort Collins, and the title of his presentation is “Messier Marathon in slides”.

During the late 1700’s, Charles Messier, a French astronomer and comet hunter, made a list of objects that are NOT comets, so that he wouldn’t have to repeatedly deal with them during his comet hunts. Near the end of March, it is possible to observe all 110 objects between sunset one night and sunrise the next morning. This is called a Messier Marathon. Looking through a telescope, Mike’s best result was 108 of the 110 objects. In 2013, he decided to photograph all 110 objects in a single night. And this presentation is the beautiful result.

Mike’s interest in astronomy began as a child. He vaguely remembers Apollo 13 and nothing at all about Mercury, Gemini, or Apollo 11. As a child, he expected that we 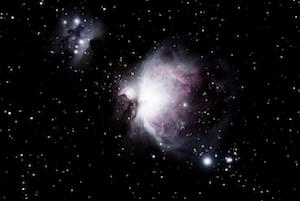 would have landed a man on Mars by now. His first telescope was one of those department store 60mm refractors that claimed a magnification of 600 with low quality eyepieces and a shaky mount. Later he got one of the orange tube Celestron C8’s. He has since acquired several other telescopes and eyepieces and sold only a few of them.

His interest in photography started in high school with a fully manual SLR camera handed down from his grandfather. At some time during the 1980’s astronomy met photography, and he did some short exposure shots with a Celestron 8 telescope and 35mm film SLR camera. The results were mediocre. He abandoned astrophotography until 2010 when he acquired a digital SLR camera.

Mike is from Fort Collins, and works in the medical imaging industry. He has degrees in Chemical Engineering and Business Administration from Colorado State University. Outside of work he has been involved with Dale Carnegie training since 2000. He is also an Elvis impersonator.

No reservations are necessary for these nights. Just come and join in for the talk and some observing afterward.