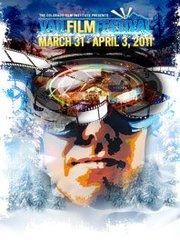 Mixing superb movies, a pleasant atmosphere and the beauty of Vail Colorado, the 2011 Vail Film Festival was a truly special event. The Festival was hosted at the Sebastian Hotel, an elegant resort with snazzy furnishings, a warm atmosphere and an accommodating staff. Films were shown at both the Sebastian and The Cinebistro; a fusion of luxurious cinema and a bistro.

The festival was launched with Olympus’ PEN Your Short 48 Film Contest with the winning creation “Running Colors” receiving $5,000, loads of equipment and the meeting of a major Hollywood producer. Movies were not the only thing to do at the festival; there were parties, award ceremonies and a concert with The Hotel Cafe’ to keep festival goers entertained late into the night. For black diamond pass holders, a festive hospitality lounge was available with the opportunity to mingle with filmmakers at the filmmakers reception, interactive discussions in the panel Q&A, and screenplay readings. The non-stop four-day liveliness entailed cocktails, hors d’oeuvres, and the chance to meet and converse with some of the creators, actors and production teams whose films were being shown. But the best part of any film festival are the films; 11 feature films and 56 adventure, animated films, documentaries, short films, and student films were shown. Festival attendees enjoyed beautiful sunny weather while walking between the theaters, restaurants, parties and even some occasional people watching. Three Tribute Awards were given on Saturday April 2 to Josh Lucas the 2011 Vanguard Award, Kate Bosworth the Excellence in Acting Award and Michael Imperioli received the Renegade Award.

Here is just a sample of the many films:

This is a documentary about saving pelicans after the BP oil spill in the Gulf of Mexico. The cute pelicans will make any viewer smile and with an interesting look at the process of saving these birds after they are covered in oil makes this movie a winner. So much so, that it won the audiences choice award for best documentary.

A cute short about a robot performing as a street dancer. The short is helped by the clever combination of live action and computer generated animation.

A sad drama with excellent acting, a well written plot with an unexpected twist and a unique premise. The movie is definitely worth watching but it is violent. This movie won the audiences choice award for best feature film.

A hilarious short featuring Kate Bosworth with humor that no one will see coming.

Certain Proof: A Question of Worth

A touching documentary about three children with cerebral palsy and their struggle to prove their worth.

A spooky, scary full length feature film shot entirely in Colorado that highlights the use of varied filming techniques.