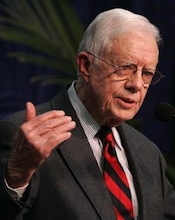 Women and girls have been discriminated against for too long in a twisted interpretation of the word of God.

I HAVE been a practicing Christian all my life and a deacon and Bible teacher for many years. My faith is a source of strength and comfort to me, as religious beliefs are to hundreds of millions of people around the world. So my decision to sever my ties with the Southern Baptist Convention, after six decades, was painful and difficult. It was, however, an unavoidable decision when the convention’s leaders, quoting a few carefully selected Bible verses and claiming that Eve was created second to Adam and was responsible for original sin, ordained that women must be “subservient” to their husbands and prohibited from serving as deacons, pastors or chaplains in the military service.

This view that women are somehow inferior to men is not restricted to one religion or belief. Women are prevented from playing a full and equal role in many faiths. Nor, tragically, does its influence stop at the walls of the church, mosque, synagogue or temple. This discrimination, unjustifiably attributed to a Higher Authority, has provided a reason or excuse for the deprivation of women’s equal rights across the world for centuries.

At its most repugnant, the belief that women must be subjugated to the wishes of men excuses slavery, violence, forced prostitution, genital mutilation and national laws that omit rape as a crime. But it also costs many millions of girls and women control over their own bodies and lives, and continues to deny them fair access to education, health, employment and influence within their own communities.

The impact of these religious beliefs touches every aspect of our lives. They help explain why in many countries boys are educated before girls; why girls are told when and whom they must marry; and why many face enormous and unacceptable risks in pregnancy and childbirth because their basic health needs are not met.

In some Islamic nations, women are restricted in their movements, punished for permitting the exposure of an arm or ankle, deprived of education, prohibited from driving a car or competing with men for a job. If a woman is raped, she is often most severely punished as the guilty party in the crime.

The same discriminatory thinking lies behind the continuing gender gap in pay and why there are still so few women in office in the West. The root of this prejudice lies deep in our histories, but its impact is felt every day. It is not women and girls alone who suffer. It damages all of us.