The guest speaker for this public star night will be Bill Possel from Boulder’s Laboratory for Atmospheric and space Physics (LASP), and the topic of his talk will be “the Cassini Mission at Saturn – An Epic Ending to an Epic Mission”. 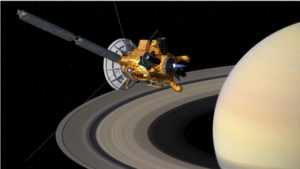 [2]During its “Grand Finale,” the Cassini mission studied a never-before-explored region very close to Saturn. The spacecraft has taken ultra-close images of the planet’s rings and clouds, while revealing new details about its interior and the origins of the rings. After 22 of these week-long orbits, on September 15, 2017, the spacecraft plunged into the giant planet’s upper atmosphere, where it burned up like a meteor, ending the epic mission to the Saturn system.  Bill Possel will describe the history of Cassini as well as the planning and execution of the Grand Finale.  The University of Colorado at Boulder’s LASP built and operated Cassini’s UltraViolet Imaging Spectrograph (UVIS) instrument.

Bill is the Director of Mission Operations and Data Systems at the Laboratory for Atmospheric and Space Physics (LASP) at the University of Colorado at Boulder.  He has over thirty years of experience in space system management, development, and operations with the Air Force, National Reconnaissance Office, and NASA.

Prior to his appointment at LASP, he served in the Air Force, retiring at the rank of Colonel.  During his Air Force career he managed numerous space system and launch vehicle programs and directed spacecraft operations at ground stations.  His experience covers space systems from concept study through launch and on-orbit operations.

Bill earned his commission following graduation from the University of Cincinnati.  He holds a Bachelor of Science in physics and a Master’s of Science in engineering physics from the Air Force Institute of Technology.  He is also a graduate of the Air Force Air Command and Staff College and Air War College.

Weather permitting after the presentation, visitors will be invited to look through the large telescope at various celestial objects. The Public Star Nights are usually held the third Friday of each month, except July, when the LTO is closed for annual maintenance.
If you have any questions, please call the observatory information line at 970-613-7793 or check the LTO web site at www.starkids.org [3]