After a family refused to allow the police to use home as a lookout, the police decided to forcibly take control of the house anyway.

A Nevada family has filed a lawsuit claiming that, after denying police requests to use their homes as lookouts, cops forcibly made their way inside anyway, firing pepperballs and eventually arresting them.

The family says that police called their son Anthony Mitchell’s home and asked to use it for “tactical advantage” in a neighbor’s domestic dispute.

He refused, but says police then burst through the door, searched the home and moved the furniture without permission. They allegedly demanded he crawl on the ground and fired pepperball rounds at him and his dog.

They then moved on to aggressively demanding access to his neighboring parents’ home, even rummaging through their refrigerator and allegedly leaving some condiments on the kitchen floor. By the end of the afternoon, the suit claims Anthony Mitchell and his elderly father were arrested for obstructing justice. 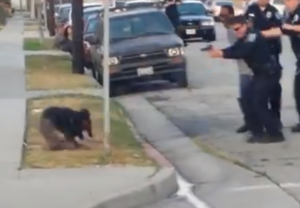 Three police officers in Hawthorne, California, have been removed from their patrol [5] this week after a video captured them arresting a man who was recording them, then shooting the man’s dog. A spokesperson for the police department says the decision is for the officers’ safety.

Earlier this week, video of the arrest of Leon Rosby and the death of Max the Rotweiler went viral, leading to apparent death threats [6] against the officers involved. Police shot the dog a total of four times after it lunged at them while they were handcuffing Rosby. The police department claims that the killing was justified, but Rosby has filed a complaint [5] alleging it was not.