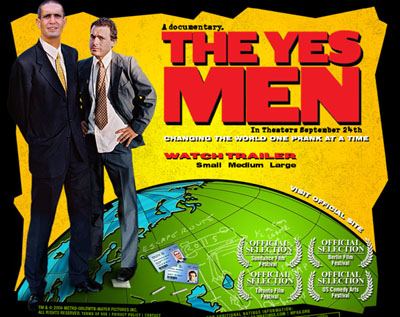 Dow pays “strategic intelligence” firm to spy on Yes Men and grassroots activists. Takeaway: movement is on the right track!

WikiLeaks begins to publish today [2] over five million e-mails obtained by Anonymous from “global intelligence” company Stratfor. The emails, which reveal everything [3] from sinister spy tactics to an insider trading scheme with Goldman Sachs (see below), also include several discussions [4] of the Yes Men and Bhopal activists. (Bhopal activists seek redress for the 1984 Dow Chemical/Union Carbide gas disaster in Bhopal, India, that led to thousands of deaths, injuries in more than half a million people, and lasting environmental damage.)

Many of the Bhopal-related emails, addressed from Stratfor to Dow and Union Carbide public relations directors, reveal concern that, in the lead-up to the 25th anniversary of the Bhopal disaster, the Bhopal issue might be expanded into an effective systemic critique of corporate rule, and speculate at length about why this hasn’t yet happened—providing a fascinating window onto what at least some corporate types fear most from activists.

“[Bhopal activists] have made a slight nod toward expanded activity, but never followed through on it—the idea of ‘other Bhopals’ that were the fault of Dow or others,” mused Joseph de Feo, who is listed in one online source as a “Briefer” for Stratfor.

“Maybe the Yes Men were the pinnacle. They made an argument in their way on their terms—that this is a corporate problem and a part of the a [sic] larger whole,” wrote Kathleen Morson, Stratfor’s Director of Policy Analysis.

“With less than a month to go [until the 25th anniversary], you’d think that the major players—especially Amnesty—would have branched out from Bhopal to make a broader set of issues. I don’t see any evidence of it,” wrote Bart Mongoven, Stratfor’s Vice President, in November 2004. “If they can’t manage to use the 25th anniversary to broaden the issue, they probably won’t be able to.”

Mongoven even speculates on coordination between various activist campaigns that had nothing to do with each other. “The Chevron campaign [in Ecuador] is remarkably similar [to the Dow campaign] in its unrealistic demand. Is it a follow up or an admission that the first thrust failed? Am I missing a node of activity or a major campaign that is to come? Has the Dow campaign been more successful than I think?” It’s almost as if Mongoven assumes the two campaigns were directed from the same central activist headquarters.

Just as Wall Street has at times let slip their fear [5] of the Occupy Wall Street movement, these leaks seem to show that corporate power is most afraid of whatever reveals “the larger whole” and “broader issues,” i.e. whatever brings systemic criminal behavior to light. “Systemic critique could lead to policy changes that would challenge corporate power and profits in a really major way,” noted Joseph Huff-Hannon, recently-promoted Director of Policy Analysis for t [6]he Yes Lab.

Among the millions of other leaked Stratfor emails are some that reveal dubious financial practices, including an apparent insider trading scheme with Goldman Sachs Managing Director Shea Morenz, who joined Stratfor’s board of directors and invested “substantially” more than $4 million in the scheme, called StratCap. “What StratCap will do is use our Stratfor’s intelligence and analysis to trade in a range of geopolitical instruments,” wrote Stratfor CEO George Friedman in September 2011. StratCap was designed through a complex offshore share structure to appear legally independent, but Friedman assured Stratfor staff otherwise: “Do not think of StratCap as an outside organisation. It will be integral… It will be useful to you… We are already working on mock portfolios and trades.” (StratCap has been due to launch in 2012, though that could now change.)

Other emails show Stratfor techniques of a truly creepy Spy vs. Spy sort: “[Y]ou have to take control of him. Control means financial, sexual or psychological control,” wrote CEO Friedman recently to an employee, Reva Bhalla, on how to exploit an Israeli intelligence informant providing information on Chavez’s cancer. (Stratfor’s “confidential intelligence services” clients include, besides Dow and Union Carbide, the US Department of Homeland Security, the US Marines, the US Defense Intelligence Agency, Lockheed Martin, Northrop Grumman, and Raytheon.)

Perhaps most entertainingly of all, the email trove reveals that Stratfor’s “Confederation Partners”—an unethical alliance between Stratfor and a number of mainstream journalists—are referred to informally within Stratfor as its “Confed F–k House.” (Another discovery: Coca Cola was spying on PETA. More such gems are sure to surface as operatives sift through the 5.5 million emails.)

A number of the remaining Yes Men-related emails take the form of reports on public appearances by the Yes Men, such as one that describes one audience comprised of “art students on class assignments and free entertainment.” Another notes that “The Yes Men tweeted about the US Chamber of Commerce ‘plotting forged emails, documents to trick (AND smear) opponents,'” a reference to an apparent plot [7] to discredit Chamber opponents using forged documents, as revealed when thousands of emails were recently leaked by Anonymous from cyber-security firm HB Gary. Yet another discusses Alessio Rastani, the Wall Street trader widely mistaken [8] for Yes Man Andy Bichlbaum, who proclaimed, live on the BBC, that “governments don’t rule the world, Goldman Sachs rules the world.”

“Rastani was right,” said the real Andy Bichlbaum five months later. “But it’s now very clear that it doesn’t have to be that way anymore.”

The Yes Men and representatives from the Bhopal Medical Appeal will join Julian Assange of Wikileaks at a press conference at noon today, Feb. 27, at the Frontline Club in London.