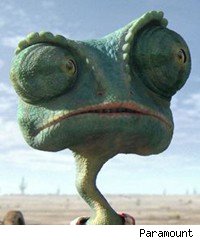 [1]Computer-generated imagery (CGI) movies are quite common in the theaters now. Pixar releases a film annually, DreamWorks Animation releases an average of three CGI movies a year, and there are many other movies released by smaller production companies. It is difficult for a CGI film to standout in the crowd. While Rango tries admirably to be unique, with stunning visuals, and interesting cinematography, the movie still comes up short due to a generic story line and less-than par jokes.

The story follows a chameleon (Johnny Depp), who is always trying to blend in. Instead of changing the color of his skin, he fits-in by taking on roles that he imagines, similar to an actor. After falling out of his fish tank, Rango finds himself in the middle of a highway in the desert. After stumbling around for a while, he finds himself in a small town, appropriately named Dirt; a town inhabited by many interesting species of reptiles, varmints and a few amphibians. While the movie is set in the present, Dirt and its inhabitants, all seem to be living in the Wild West. Our hero takes the name Rango, and after the lucky defeat of a hawk that has terrorized the town, he is appointed sheriff. However, not everything is fine in Dirt. The town is almost out of its lifeblood, its water. Water is disappearing and it is up to Rango to find out where it is going.

The plot is easy to follow and the themes are similar to ones that have been used in other CGI movies. The difference with this movie is in the tone. Rango is very dark for a family movie. Several characters die and a feeling of grit, more common in westerns than in family movies, hangs over the entire movie.

The most interesting aspect of Rango is the visuals. This movie is certainly one of the best-looking CGI productions to date. Objects like tin cans, glass bottles and scales on a rattle snake look photorealistic. Objects in the movie are covered with sand and dirt, which looks uncannily real. The film also has great cinematography; scenes have an artistic quality rarely seen in family movies.

The humor in Rango falls into the tradition of most modern family movies with simple jokes for kids to laugh at and racy innuendoes for teens and adults to find amusing. Jokes are funny and original but forgettable and there probably will be no jokes from Rango mentioned a month from now. The movie characters make reference to  several past movies, especially old westerns.

If you are interested in a film that brings in multiple past movie references, great cinematography, and the occasional funny joke – go see Rango.