Losing a game is never an enjoyable experience for any team but the defeat the Berthoud High football team suffered at Friday night’s homecoming game was particularly painful. Berthoud not only lost 19-6 to Fort Morgan but also suffered a devastating injury to one of the team’s star players.

Senior halfback, team captain and 2010 All Conference selection Chase Fraser suffered a broken arm on Berthoud’s opening drive. The injury will sadly cost the senior the remainder of his season.

“We’re going to miss (Fraser) obviously but we have to play the rest of the league schedule with who we have. I know Chase will be supporting us and helping coach the kids at practice and we will just go with who we have,” said Berthoud Head Coach Dan McGinn after the game.

Fraser was instrumental on Berthoud’s opening possession. The Spartans assembled a 14-play drive in which Fraser accounted for 48 (30 rushing, 18 receiving) of the Spartan’s 55 yards as they advanced down to the Fort Morgan nine yard line. The injury occurred on a run on first-and-goal and seemed to take the wind out Berthoud’s sails. After a pair of incomplete passes, Berthoud’s field goal attempt was blocked.

The blocked field goal was closest either team would get to scoring in the first half.

Berthoud’s defense played exceptionally well in the first half. The Spartans forced three Fort Morgan turnovers – one on a fumble, one on downs when linebacker Brok Diffendaffer stuffed the Fort 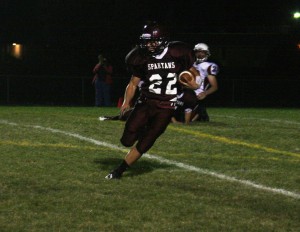 [2]
Michel Woodiel carries the ball in the 2nd quarter

Morgan ball carrier on fourth-and-three and one on a Greg Hutching interception in the waning moments of the second quarter – and allowing the Mustangs to gain only 68 yards from scrimmage.

Fort Morgan did begin to find their offensive rhythm in the second half. Led by a power running game, the Mustangs put together a 12-play, 72-yard drive that chewed 8:33 off the clock. Berthoud did put forth a valiant effort to stop the drive, however.

On third-and-nine with the ball at the Berthoud 35, Spartan defensive lineman Sheldon Sladek sacked Fort Morgan quarterback James Martens to force fourth-and-fourteen. Yet Martens answered back by completing a pass over the middle for a gain of 25 and Mustang first down. Martens would score himself, running up the middle on first and goal from the Berthoud four to give the Mustangs a 7-0 lead with 0:56 remaining in the third quarter.

All six players were instrumental on Berthoud’s lone scoring drive of the night. The Spartans engineered a 12-play, 78-yard drive that was capped off by a Ruebesam touchdown run and gave the Spartans late life as they trailed by seven, 13-6 with 1:52 remaining.

Unfortunately Berthoud was unable to recover the ensuing onsides kick. Fort Morgan relied on their ground game to chew up the remainder of the clock and score an icing-on-the-cake touchdown with 0:09 left to clinch the 19-6 victory.

“I’m not going to make any excuses; we’ve got to start playing better football. The guys just need to focus and they need to execute, that’s really what it is,” McGinn said.

The loss drops Berthoud to 3-2 at the midway point of the 2011 season. The Spartans will travel to Longmont on Friday night to take on 4-1 Silver Creek in the opening game of league play.