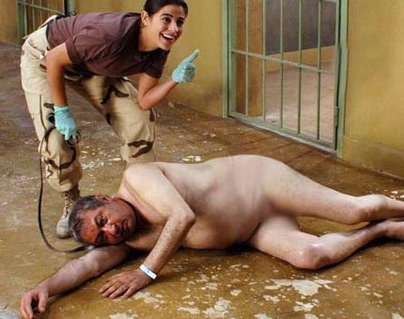 The truth-telling of the imprisoned Bradley Manning continues to bear rich fruit, even as he faces a lifetime in prison for acting on principle to save innocent lives and prevent his country from staining itself further with war crimes. This week, the Guardian released a special investigation [3] into the hideous regime of torture that the United States imposed and empowered during its years-long rape of Iraq.

The Guardian report draws on the trove of documents that Manning gave to Wikileaks (and the now diplomatically “sequestered” Julian Assange) to provide new details on the direct links of America’s highest officials — including the bipartisanly adored and now much mourned retired apparatchik David Petraeus — to the torture of tens of thousands of Iraqis.

In many ways, of course, it’s hardly a revelation that American forces were deeply involved in torture during the “extraordinary achievement” (B. Obama) in Iraq. Some cranks have been writing about it since the earliest days of the invasion — as in this piece, from August 2003: [1]

Perhaps that’s not the precise wording used by the Washington Post this week, but it is the absolute essence of its story about the Bush Regime’s new campaign to put Saddam’s murderous security forces on America’s payroll.

Yes, the sahibs in Bush’s Iraqi Raj are now doling out American tax dollars to hire the murderers of the infamous Mukhabarat and other agents of the Baathist Gestapo – perhaps hundreds of them. The logic, if that’s the word, seems to be that these bloodstained “insiders” will lead their new imperial masters to other bloodstained “insiders” responsible for bombing the UN headquarters in Baghdad – and killing another dozen American soldiers while Little George was playing with his putts during his month-long Texas siesta.

Naturally, the Iraqi people – even the Bush-appointed leaders of the Potemkin “Governing Council” – aren’t exactly overjoyed at seeing Saddam’s goons return, flush with American money and firepower. And they’re certainly not reassured by the fact that the Bushists have also re-opened Saddam’s most notorious prison, the dread Abu Ghraib, and are now, Mukhabarat-like, filling it with Iraqis – men, women and children as young as 11 – seized from their homes or plucked off the street to be held incommunicado, indefinitely, without due process, just like the old days. As The Times reports, weeping relatives who dare approach the gleaming American razor-wire in search of their “disappeared” loved ones are referred to a crude, hand-written sign pinned to a spike: “No visits are allowed, no information will be given and you must leave.” Perhaps an Iraqi Akhmatova will do justice to these scenes one day.

There were many, many more where that came from, from many sources, as the mosaic of horror built up, fragment by fragment.