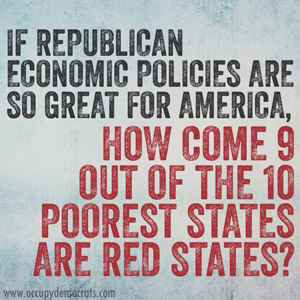 The partisan blogosphere is filled with arguments over whether liberal or conservative policies are better for states. No matter what is proposed — cutting the sales tax, raising the minimum wage, etc. — someone can always come up with a state to cite as an example of why it’s a good (or bad) idea.

But we were struck by this claim [3] posted by the pro-Democrat group Occupy Democrats [4] on Facebook:

“If Republican economic policies are so great for America, how come 9 out of the 10 poorest states are Red states?”

We’re not going to rule on the cause-and-effect question posed by the posting. Yet because Red states have a reputation for being more business-friendly, and because many argue that pro-business policies lead to better lives for everyone, we wondered whether the Occupy Democrats’ claim was correct.

When we emailed Occupy Democrats, founder Omar Rivero sent us links to several sources including a sortable Wikipedia table [5]based on the 2010 U.S. Census, along with more recent data [6] from the U.S. Department of Commerce Bureau of Economic Analysis. We also did our own search of the U.S. Census database.

We’ll start with the standard definition of a Red state: one that voted for the Republican candidate in the most recent presidential election.

It should come as little surprise that in the heart of America’s South where the marriage of free markets and “traditional values” is celebrated by the routine casting of votes for red-state Tea Party style Republicans each election cycle, that the American dream is shown to be at its weakest.

In a series of studies performed by Equality-of-Opportunity.org [10], a site run by a collection of leading Harvard and Berkeley economists dedicated to studying economic mobility, Southern red-states consistently ranked at the bottom in regards to  opportunity for those born in one economic class to elevate themselves out of poverty or into wealth. The findings come as little surprise to labor economists and social justice advocates, who have long held that pro-corporate, anti-union economic policies lead not to prosperity, but social stratification and the enshrining of an economic aristocracy.

Of the bottom 21 cities in the ranking (those in which economic and social mobility are the lowest,) all but three were located in the South, with the odds of a child born in poverty in those areas somehow working/raising themselves out of their condition, being generally anywhere between 2.6% and 6.7%.  As only a slight departure from the old days of institutionalized slavery, this modern top-down social structure has in many ways mimicked the bad-old-days of plantation owners and field hands by way of its consistently anti-union, anti-worker, anti-minority sentiments.

Class-rigidity is most extreme in the South, according to leading Harvard and Berkeley economists.

The website Equality-Of-Opportunity.org [12] was established this year by four leading economists from Harvard and Berkeley, and it now headlines their major findings, “Mobility in the 100 Largest Commuting Zones.” It ranks all 100 largest U.S. cities for the chances of a person born poor to rise from the bottom 20% to the top 20%.

Whereas all of the top 21 cities (NYC being ranked #21) are shown clustered there closely around 10% for the given place’s odds that a resident born in the bottom 20% will rise into the top 20%, all except just four of the bottom 21 cities are in Old Dixie. Here, the probabilities of rising from the bottom 20% to the top 20% range widely, between just 6.7% (one-third less than in the best locales) down to merely 2.6% (around one-quarter of the probability in the best locales), among these 21 bottom-ranked cities.

In other words: virtually all of this nation’s class-rigidity still remains in the U.S. South, even after the Civil War. New Dixie has replaced the aristocracy’s black slaves of Old Dixie, by the local (white) aristocracy’s institutionalized bigotry against poor people, now of all ethnic groups. What used to be their purely racist bigotry has, it seems, devolved into a crushing, pervasive, classist, bigotry in the South.

Explaining this would produce controversy, and unfortunately the researchers don’t even try. However, it is a striking finding, which demands an explanation.

For a century after Abraham Lincoln was shot in 1865, the North’s Protestant aristocracy increasingly supported the Republican Party, which gradually became, in a sense, the new version of the old aristocratic Southern Democratic Party, but now spread nationwide: oriented more toward concerns about the “free market” than about democracy. Government became subordinated to economics—not just any economics, but “free market” economics, whereas economics had virtually nothing to do with the U.S. Constitution, which was instead concerned with political matters: government.