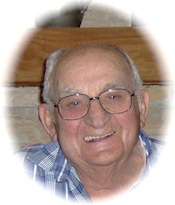 Al grew up on a farm, graduated from St. Joseph’s Military Academy, in Hays, Kansas and received a MS degree from University of Denver in Mechanical Engineering in 1949.

Al served in the Army Air Corps and then served 20 years in the Air Force reserves.

Al Married Mary Groll of Pana, Illinois in 1949. They lived in Denver and moved to Berthoud in 1972.

Al worked for Frontier Airlines as personnel manager, then Cosbro Manufacturing partnership and half owner, which later became Refabeo Inc. After moving to Berthoud he built and started Berthoud Rose Farm Inc., a wholesale grower of cut roses, retiring in 2005.

He was a member of St. John the Baptist Catholic Church, Colorado Greenhouse Growers Assoc., Rose’s Inc., Town of Berthoud board member, Berthoud National Bank board of directors, and Colorado Air National Guard for 20 years.