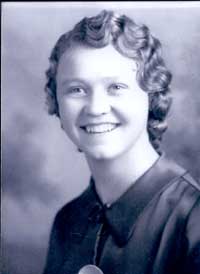 Anna was born on September 10, 1918 in Berthoud, the daughter of Charlie and Wendla (Pohl) Johnson. She graduated from Johnstown High School in 1936. Prior to her marriage, Anna worked as a waitress at the Dude Corral in Loveland.

Anna married James Adams on April 20, 1950 in Loveland. After her marriage, Anna became a homemaker and loving wife and mother. They moved to Longmont in 1960 from Lafayette. Anna was of the Christian faith and enjoyed cooking and gardening.

She was preceded in death by her parents; her husband James in 1994 and a brother, Lee Johnson.

Anna is survived by her son, Charles Adams (Marjie) of Longmont; her grandchildren, Carrie Adams, Amy Adams and Scott Adams (Jebeke); her great-grandchildren, Hosannah, Hadassah and Charlie; her brothers- and sisters-in-law, Helen Johnson of Loveland, Ronna Adams of Longmont, Fred and Joyce Adams of Longmont, Donna and Harry Tenney of Fairburn, Georgia, Leota and Bob Lugert of Tinley Park, Illinois and Gary Adams of Atlanta, Georgia and numerous nieces and nephews.

A funeral service will take place at 10:00 a.m. on Wednesday, March 16, 2011 at Ahlberg Funeral Chapel. Interment at Green Mountain Cemetery in Boulder. Memorial contributions may be made to Gideons International and mailed to Ahlberg Funeral Chapel. Share condolences and memories with Anna’s family at www.ahlbergfuneralchapel.com [2] .