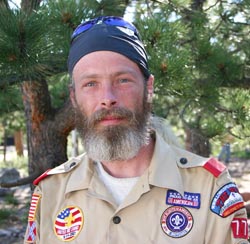 Benjamin Daniel Haskew was born at Holloman Air Force Base in New Mexico on June 14, 1974 to Dr. Stephen W. Haskew and Anne Haskew.  He passed away on November 9, 2010.

His early years were spent with his family in Colorado, upstate New York, Tucson, AZ and then to Lyons, CO in 1986.  Ben attended Lyons High School and graduated from Olde Columbine High School in 1993.  He was married with 4 children.

Ben loved working with horses and worked at Peaceful Valley Lodge as well as Aspen Lodge in Estes Park.  His favorite jobs were gathering and selling firewood to his friends and being a stay-at-home dad.  He was a member of the Longmont Church of Christ.

Ben was quick to help in church activities, very active in Boy Scout Troup 77 in Boulder, the NRA and the South Platte Valley Historical Society.

He loved camping with the Boy Scouts and his family at Rendezvous.  Ben had just become a Cub Scout Den Leader for Tiger cubs in Berthoud.  He loved spending time in the mountains and treasured his experiences at Philmont Scout Ranch.  He never met a stranger and stopped to help anyone who might be having car trouble or needed an extra hand.  Ben had an unusual-appearing truck and loved to have his picture taken with the truck.

Ben is survived by his wife and 4 children of Berthoud; his parents; his brother and sister-in-law, Jake and Amanda Haskew of Vienna, Austria; 2 nieces and a host of extended family and friends.

A memorial service will be held at 3 p.m. on Saturday, November 20, 2010 at the Longmont Church of Christ, 1351 Collyer Street in Longmont.  In lieu of flowers, donations may be made to the Ben Haskew Memorial Fund and mailed to Ahlberg Funeral Chapel.  Share condolences with the family at www.ahlbergfuneralchapel.com [2].