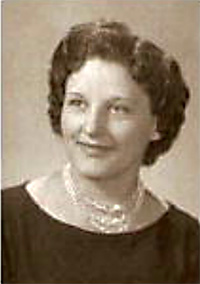 She graduated in 1939 from Berthoud High School as valedictorian, with the highest grade point average on record for Berthoud High. She attended the University of Colorado, where she won the Beta Alpha Psi award for the highest grade in the School of Accounting. She was a member of Sigma Epsilon Sigma scholastic honor society.

She moved to Loveland in 1942. She married Linn Mark Longley in Loveland, on Christmas Eve, 1942. To this union was born Joan Kay Longley (now Mrs. Gregory T. Zack of Brush,) and a granddaughter Hillary C. Zack (now Mrs. Michael A. Oliver of Phoenix, Arizona). Linn passed away on Jan. 18, 1994.

Later, she worked half days for 14 years in the life insurance office of Grant M. Ford, CLU, in Loveland, CO. Following his semi- retirement, she worked part-time for two years for Aspen Mortgage Company, until they closed their Loveland office and moved to Fort Collins.

She was preceded in death by her husband Linn Longley, her brother Alvin ‘Bill’ Huppe, and her sister Helen Bashor as well as her sister-in-law Anna Marie Longley Wood and her husband Charles Wood from Denver, CO. and her niece Betty Akers of Longmont, CO.