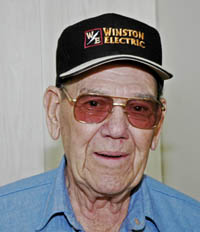 Charles L. Winston, 85 of Berthoud, Colorado passed away on Monday, October 17, 2011 at the Paonia Care and Rehab Center in Paonia, Colorado, with his family by his side.

Charles was born on August 4, 1926 to Roy L. and Flora E (Bender) Winston in Mission Creek Township, Kansas. The family moved to Berthoud in 1935 from Topeka, Kansas.

Charles attended Berthoud schools and served in the US Army during WW II. Charles was involved in the trucking industry working as a driver, both in local and cross country hauling and later in the safety department, working several years for Monfort of Colorado. He also served as Berthoud police chief for a period of time and was a member of the Berthoud Volunteer Fire Department. He was a member of the Berthoud United Methodist Church and had been active at the Berthoud Senior Center for many years, helping to secure the Center’s first van and often serving as its driver. Charles was also a member of the Good Sam’s Club, known to his friends there as “Chuck”, he enjoyed traveling in the RV with Dorothy and later Maxine to Texas and Arizona meeting up with their friends. After retiring the RV trailer, Charles enjoyed working with wood. Wood shelves were the first items enjoyed by many family members then along came the Adirondack chairs, making little ones as the great grandchildren came along.

Charles enjoyed his family, spending time in Dillon and later in Crawford with Francis and family celebrating birthdays, Father’s Day and other holidays, and making occasional trips to southern California to visit his daughter Susan and family.. He made many friends, there wasn’t anyone who he couldn’t talk to about something. He enjoyed walking down to the Senior Center for coffee and visiting, catching up on the news in town.

A graveside service will be held at the Berthoud Greenlawn Cemetery on Friday, November 4, 2011 at 10:00am with Rev. Stephanie Munoz officiating.