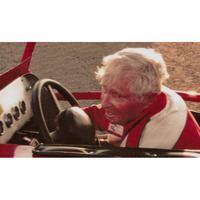 On October 12th 1947 he married Bettie J. Schleiger in Campion. They lived in the Berthoud area their entire lives, living at the old Berthoud Homestead south of Berthoud since the early 1950’s. Compdon made his living as a farmer, being self employed as a dairy and crop farmer until he semi-retired in 1997 and began wintering in Apache Junction, Arizona. Always to return home in the spring and attend to chores and keeping his farm looking pristine.

Comp’s passion was racing circle track cars and he was a respected and accomplished driver with many wins and trophies to show for his efforts. He raced 49 years before hanging up his helmet.

A private family graveside service will be held at Greenlawn Cemetery in Berthoud, Colorado.

Memorial contributions may be made to the Campion Academy Worthy Student Fund in care of Kibbey-Fishburn [1] Funeral Home.