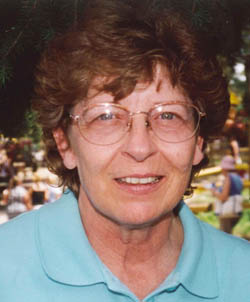 Connie J. Golightly, 59, of Berthoud passed away April 28, 2010 at McKee Medical Center. She fought a brave and courageous fight with lung cancer but other complications ended her almost three-year battle.

She was born May 11, 1950 in Longmont, Colorado to Eugene and Naomi Maxine (George) Howell.

She attended Lakewood High School for one year, but graduated from Poudre High School in Fort Collins. She married Jan Allan Golightly on June 11, 1970 in Denver. He preceded her in death November 12, 2005. She moved from Westminster to Berthoud in 2006.

Connie worked at Ryder Truck Company, Green Thumb, Farmers Union Insurance Company, at the Dave Cook Store, and at Mervyn’s Department Store. She loved being with her granddaughter, she did a lot of volunteer work, and was involved with the Anglican Catholic Church. She enjoyed bowling, playing softball, gardening, remodeling, and reading.

She was preceded in death by her mother and her brother Richard J. Howell.

Memorial services will be held Thursday 2 p.m. at Viegut Funeral Home. Cremation has been completed.

Memorial contributions may be made to the Connie J. Golightly Memorial Fund in care of Viegut Funeral Home.

For condolences, go to  www.viegutfuneralhome.com [2].