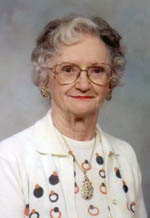 Doris McKanna Houchin, 90, of Las Vegas, passed away May 14, 2010, at Prestige Assisted Living in Henderson. Doris was born in Berthoud, Colo., Dec. 19, 1919, to the late Linn E. and Rhoda McKanna. Doris was a welder at Rocky Mountain National Arsenal during World War II. She retired from the City of North Las Vegas in 1980, as payroll clerk and was a member of the Eastern Star and a charter member of Sunrise Mountain United Methodist Church, in Las Vegas. She was the beloved wife of the late Neal Houchin.

She was also preceded in death by her two brothers, Everett McKanna of Denver, and Elton McKanna of Long Beach, Calif. Doris is survived by her children, Larry L. Houchin of Clinton, Conn., and Juanita Johnson of El Cajon, Calif.; three grandchildren; and two great-grandchildren. Visitation will be 10-11 a.m. Thursday, May 20, with services following, both at Palm Mortuary, 1325 N. Main St. Burial will follow at Palm Memorial Park. In lieu of flowers, donations can be made to Heritage UMC, 2075 Lamb Blvd., Las Vegas, or Solari Hospice, 5550 S. Jones Blvd., Las Vegas, or to your favorite charity in Doris’ name.