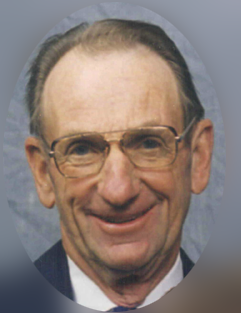 Following his graduation from Sterling High School in 1941, he trained as an aircraft electrician in Omaha and Baltimore.  In Omaha, just prior to his entry into the Army Air Force in 1944, he met Irene Iwan.  Ed was first stationed in Norfolk, VA where he and Irene were married on February 13, 1945.  Following WWII they returned to Omaha where their son Ken was born.

They moved to Colorado in 1953 where Ed first worked for Public Service and then started his own electrical business.  He and Irene settled in Lakewood where their second son Larry was born and later their daughter Carol.  Ed following his lifelong dream of owning a farm and in 1967 he and his family moved to Mead, CO.  A few years later he purchased a farm on the Little Thompson River near Berthoud where he farmed and ran his electrical business since 1971.

Ed was an avid football fan and he couldn’t pass up a fruit stand.  He was a member of St. John’s Catholic Church.

He is survived by his wife of 65 years, Irene; sons Ken and his wife Helen, Larry and his wife Susy, and daughter Carol and her husband John; five grandchildren, and one great-grandchild.

A Mass of Christian Burial will be held Thursday at 10:30 a.m. St. John’s Catholic Church.

Viewing will be Wednesday from 5 to 8 p.m. with a rosary at 7 p.m. at Viegut Funeral Home. Graveside services with military honors at Greenlawn Cemetery, Berthoud.

For condolences, go to www.viegutfuneralhome.com [2].