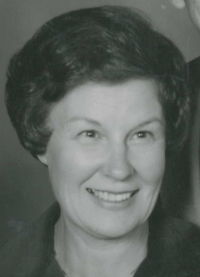 Eileen Elnora Thompson, 79, died on December 14, 2011 from Leukemia. She was born on October 3, 1932 in Sheridan County, Kansas to William Heim and Marie Mannebach Heim. After graduating from Leoville High School in Leoville, Kansas, she enrolled at St. Anthony’s School of Nursing in Hays, Kansas graduating in 1954. On November 16, 1954 she married Philip Thompson at St. Frances Cabrini Church in Hoxie, Kansas.

After living in Loveland for 44 years, they moved to Berthoud. Eileen was employed at Loveland Memorial Hospital and McKee Medical Center for 20 years. She enjoyed playing bridge, reading, collecting stamps, and going to auctions and garage sales. Eileen was a member of St. John the Evangelist Catholic Church and the Council of Catholic Women.

She was preceded in death by her parents, infant brother and a sister-in-law.

Mass of Christian Burial will be held Tuesday, December 20, 10:00 a.m.. at St. John the Evangelist Catholic Church. A viewing will be held Monday at Viegut Funeral Home from 5-7 p.m. with  Rosary beginning at 7 p.m. Burial at Loveland Burial Park.

Memorials may be made to Pathways Hospice of Larimer County or Capuchin Province of Mid America in care of Viegut Funeral Home.