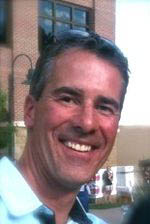 Jason James Olinger of Timnath, Colorado passed away on December 17, 2011 at the age of 40. He was born in Bloomington, Illinois to Jack D. and M.J. Olinger.

Jason grew up and was baptized in Dubuque, Iowa. Early life found him around family, friends and relatives, where his dad taught him to bowl. At age eight, Jason and his family moved to Westminster, Colorado, where Jason attended Mesa Elementary and Scott Carpenter Junior High. During this time, he became a Boy Scout and was active in the Arvada soccer program. At age thirteen, Jason and his family moved to Berthoud. He attended Turner Middle School and graduated from Berthoud High School in 1989. At Berthoud High School, he played guard on the basketball team, ran with the cross-country track team, and played soccer. He left home to attend college at Ft Lewis in Durango, Colorado for two years and then to Fort Collins to become a CSU Ram.

His college days were followed by a successful sales career. Since 2004, he had worked for Pedersen Toyota of Ft Collins, earning many top sales awards along the way and establishing great relationships with clients, co-workers, and friends.

On September 6, 2007 in Capri, Italy Jason married Kathryn Crabtree. They made their home in Timnath, Colorado. They loved to travel together and with friends to Mexico, Breckenridge, and this fall to Australia. Some of the fondest memories come from spending time together with friends, enjoying the laughter and camaraderie. Over the last several months, Jason and his grandson, Samson, created a beautiful bond between them, one that will forever be held closely in the hearts of those who witnessed it. Jason was blessed to have so many friends and family he loved dearly.

Jason’s number was always 24 which he integrated into many aspects of his life. He was an avid sports fan and a collector of sports memorabilia. He loved bowling, cycling, golfing, fishing and riding his motorcycle. He always considered Michael Jordan his favorite athlete. He was also a Denver Nuggets fan.

A memorial service to celebrate Jason’s life will be held on December 28, 2011, 10 am, at Timberline Church 2908 Timberline Rd, Ft Collins.