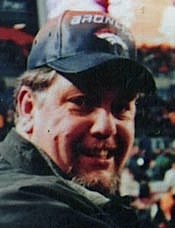 [1]John E. Kokes, 55, of Berthoud passed away on March 5, 2012 from a long battle with cancer. He was born on December 25, 1956 in Sidney, Nebraska to Glenn and Vivian Kokes. John attended Caliche High School and graduated in 1975. On February 8, 1997 he married Jeri O’Bryan and together they made Berthoud, Colorado their home for the last 18 years. John worked heavy equipment construction throughout Colorado in various locations. John’s enjoyments in life were golfing, 4-wheeling in the mountains, and going up the hill gambling. He loved having family gatherings and mingling with friends. His greatest joy was spending time with his grandchildren and going to support them in their events.

He was preceded in death by his father Glenn Kokes.

A memorial services will be held at 12:00 p.m., Saturday, March 17, 2012 the Berthoud Community Center located at 248 Welch Avenue in Berthoud. A luncheon will follow the services. In lieu of flowers, memorial contributions can be sent to Hospice Care of Boulder and Broomfield Counties at 2594 Trailridge Dr. East, Lafayette, CO 80026.

Go to www.viegutfuneralhome.com [2] for condolences.