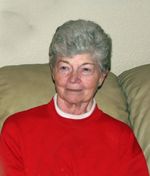 She was born December 13, 1937 in Bartley, Nebraska, the daughter of Jesse John and Gladys Alice (Turpen) Frank. She graduated from Bartley High School in 1955.

On August 9, 1956 she married Byron “Barney” Foster in Bartley, Nebraska. They were blessed with two daughters: Regena “Gena” and Tara.

Marlene touched many lives while working for the St. Vrain Valley School District as a Special Ed Para Pro for 26 years.

Her main interest in life was her family. She was an active part of her daughter’s lives while they were growing up and then enjoyed watching the grandkids participate in sports and different activities. She also loved watching football, especially enjoyed following the Nebraska Cornhuskers and the Denver Broncos. During her quiet times she could be found enjoying her flowers or keeping an eye out for the hummingbirds that she loved.

Marlene was preceded in death by her parents, her brother Marion Frank, her sister Donna Mae Frank and her son-in-law Chris Bertron.

She is survived by her husband of 54 years, Barney Foster of Longmont, CO; two daughters Regena “Gena” Bertron of Loveland, CO and Tara Dinsmore and her husband Mike of Berthoud, CO. She is further survived by her four grandchildren: Alyssa Bertron, Zachary Dinsmore, Dylan Dinsmore and Lauren Bertron, her brothers Gene Frank of Cambridge, NE, Marvin Frank of McCook, NE, and Bill Frank of Cheyenne, WY.

Cremation has been entrusted to Howe Mortuary and Cremation Service, Longmont.

Memorial services were held at 10:00 a.m. on Saturday, September 4, 2010 at the Howe Mortuary Chapel with Rick Ebbers of The Journey officiating. Services will conclude at the Chapel.

Voluntary contributions may be made in Marlene’s memory to Hospice of Boulder and Broomfield Counties, 2594 Trail Ridge Drive E, Suite A, Lafayette, CO. 80026