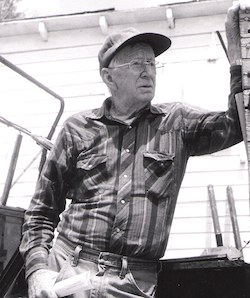 Maurice “Red” Haworth, a lifelong resident of the Berthoud area, died peacefully in the comfort of his home, at the age of 83 on April 3, 2012. His pioneer farm west of Berthoud has been in the Haworth family since 1901.

Maurice was born Sept 20, 1928 to Everett and Ina Haworth. He was active in farming all his life. He also worked various construction jobs around Colorado. He married Allene Gettman on March 12, 1949. They raised four children, Karen, Marilyn, Charles and Stanley. Allene passed away on Oct 1, 1986. He was also preceded in death by his parents, a sister Margaret, and a brother Myron.

Red saw farming evolve from horsepower to gas power and was a constant presence in the Berthoud area all his years.

As faithful as a doctor making his rounds, Red traveled daily from coffee shop to coffee shop, sharing his smile and good nature with everyone he met.

One of his favorite pastimes was sitting outside in his yard, among the cottonwood trees, soaking up the sunshine. He loved admiring his flag, and visiting with anyone who cared to stop by. How ironic that the mighty cottonwood trees lasted only as long as the man who loved them.