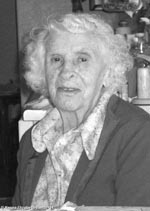 Nanna and Francis were married Feb. 9, 1940, in Kearney, Neb. They farmed south of Paxton, Neb., until their move to Colorado in 1955. In addition to farming for 51 years, she and Francis were part owners for 23 years in Banderet Equipment in Commerce City, Colorado.

Never boastful about her many talents, her family had the luxury of knowing about her incredible fried chicken and angel food cake.

She will be lovingly remembered for her deep wisdom and wonderful sense of humor.

Her husband Francis preceded her in death, as did their infant son, John Harry Banderet; her parents and brothers George, David, Joe, John, Alex, Thomas Beveridge and sisters Mabel James and Mary Arlene

To honor her memory, her family asks that donations be made to the American Macular Degeneration Foundation, P.O. Box 515, Northhampton, Mass., 01061-0515.