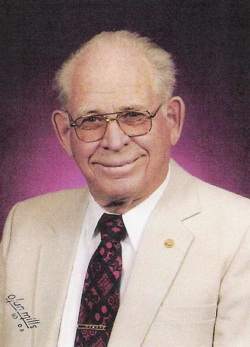 Raymond B. Scott was born October 14, 1923, at Alma, Nebraska to Charles Everett and Faye Georgia (Coe) Scott. He died in Loveland, Colorado on November 18, 2010. He attended grade schools in the Alma, Nebraska area and graduated from high school in 1942 in Castle Rock, Colorado. The family moved to Colorado in 1938 from Nebraska and farmed in the Mead-Platteville area, later moving to near Larkspur, Colorado. His father died in the spring of 1942 and Ray took over the farming duties and supported the family when they moved to a farm east of Denver. In 1947, Ray left the farming to another brother and entered Westmar College at Le Mars. Iowa to prepare for the Christian Ministry in the Evangelical United Brethren Church.  In 1951, Ray entered the Seminary at Naperville, Illinois and graduated in 1954.

While in college, Ray married Joyce E. Eckardt of Lake Odessa, Michigan on August 17, 1948. She worked as a Medical Technologist and jokingly said that she had gotten her PHT (putting hubby through) degree. Following graduation in 1954, they returned to Colorado where Ray served his first church at Seibert, Colorado. He also served churches at Peetz, Johnstown, Berthoud, Colorado and Rawlins, Wyoming, all in the Rocky Mountain Conference of the United Methodist Church, completing 35 years of ministry. Ray retired in June of 1989

During their ministry at Berthoud, they were foster parents to 35 children in 10 years, under the supervision of the Larimer County Social Services. Life was full, busy, and rich in the wonderful service of the Lord.