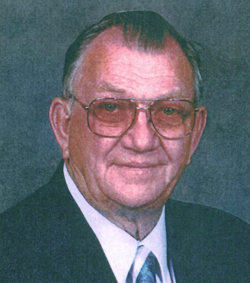 Robert Eugene Andersen – (b. October 12, 1928), passed away peacefully on August 6th, 2010 after a short illness from end stage prostate cancer.

Robert was born on a farm in Rosalie, Nebraska to Emanuel and Anna Christensen Andersen. Robert was the youngest child born to the family of nine children.

Robert worked on the family farm growing up and graduated high school in Rosalie. He continued to work the farm until he married Marion Brehmer on November 7th, 1954. They moved to a farm in Bancroft, Nebraska and farmed until 1962 when he moved his family to Longmont, Colorado.

Robert was known as the local “lawnmower man” taking in and repairing lawn mowers. He was an exceptional mechanic, knowing how to fix just about anything. On any given day you could find him out in his garage tinkering. Robert enjoyed going to yard sales with his wife over the years and could always spot a bargain. He loved to gamble and enjoyed going up to Blackhawk as often as possible. Robert was a social person and loved sitting on the front porch talking with all the neighbors. His favorite eating spot was Aunt Alice’s Kitchen in Longmont where he knew just about everyone.

Robert was preceded in death by his parents, 3 brothers, 4 sisters and his wife Marion. He is survived by a sister, Betty, and by his sons Steve (Janet) of Windsor, Bruce (Cheri) of Firestone, Chris (Sherry) of Berthoud, Todd (Marcia) of Greeley, 9 grandchildren, 10 great-grandchildren and numerous nieces and nephews.

Services will be held on Tuesday, August 10th at 10:00 am at the First Presbyterian Church of Berthoud. Inurnment will be at Greenlawn Cemetery, Berthoud, CO immediately following the service. A reception will be held in the basement of the church following inurnment at the cemetery. Cremation will be entrusted to Viegut Funeral Home. No viewing.

Contributions can be made in Robert’s name to First Presbyterian Church of Berthoud.

For condolences, go to www.viegutfuneralhome.com