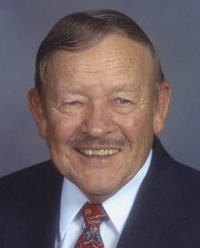 Roger Lee Gibbons, 81, of Berthoud, died on July 12, 2011 at McKee Medical Center in Loveland. Roger was born on July 25, 1929 to Theron Clay and Rosa Leora (Stewart) Gibbons in Worland, Wyoming where he grew up on his family’s ranch. He graduated high school in Worland, and then attended and graduated from the Spartan School of Aeronautics in Tulsa Oklahoma.

Roger’s love of flying led him to the United States Air Force Air Training Command where he served as a civilian flight instructor. In 1957, Roger continued his career as a pilot with Western Airlines and, in 1989 he retired from Delta Airlines, which had acquired Western in the early 80’s. Roger married Janet Patricia Mansfield on September 10, 1959 and in 1968 Roger and Jan established themselves and their family in Berthoud. Roger loved gardening, farming, fly-fishing, playing the banjo and music in general. He also enjoyed woodworking and “tinkering” with cars in his shop. In addition to his many hobbies, Roger loved Western American history, and spent his retirement years traveling the United States with his wife, family and friends.

Roger is survived by: his daughter, Jennifer Gibbons of Ft. Collins; his son and daughter-in-law Stewart and Christie Gibbons of Ft. Collin as well as their children Clay and Grace Gibbons; his brother and sister-in-law Terrill and Kathleen Gibbons, and his sister Joyce Steers, all of Worland, Wyoming. He is preceded in death by his parents, his wife Jan and his sister Miriam Coryell.