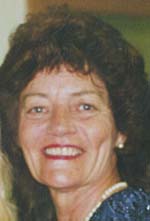 [1]Shirley Jean Sandlian, 68 of Berthoud, died December 8, 2010 surrounded by her loving family. Shirley was born in Boulder, CO on October 20, 1942 to Jay D. and Elsie E. Winn. She grew up and went to school in Boulder.

Shirley married John Robert Cushman in September of 1961. Together they had five children. John passed away, April 14, 1975.

Shirley was a loving, generous and caring woman who devoted her life to raising her five children. She also enjoyed spoiling her grandchildren. She was an inspiration to all who knew her.

Shirley is preceded in death by her two husbands and her father Jay D. Winn.