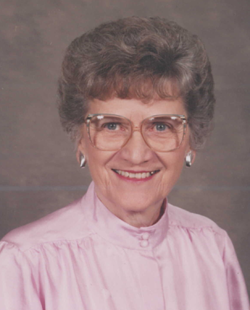 She spent her youth in Lincoln attending Lincoln High. In September of 1942 she married the love of her life, Maynard Stokes. In 1958 she and Maynard moved to Colorado with their two sons, Roland and Arlen. After initially moving to Boulder they lived in Longmont, rural area west of Berthoud, and finally in Loveland. For the past few years, Ginny had been living at the Good Samaritan Village in Loveland.

Ginny was a devoted wife, mother, grandmother, and homemaker. Her family was the most important focus of her life. She liked to sew, knit and play card games. She was a first rate Pinochle player. She was also an avid fan of the CU Buffaloes Football team and also enjoyed the Broncos.

Ginny is survived by her sons and daughters-in-law, Roland and Ginny Stokes of Windsor and Arlen and Judy Stokes of Lafayette, and her four grandchildren: Matt Stokes, Dan Stryker, Zach Stokes and Lori Connor. She is also survived by her sister and best buddy Emma Salmen and her husband Russ of Longmont.

Ginny was preceded in death by her husband Maynard in 1986, and her brothers Ed and Rudy Bauer.

Memorial contributions may be made in Ginny’s honor to Pathways Hospice or the American Cancer Society in care of Viegut Funeral Home.

For condolences, go to www.viegutfuneralhome.com [2].