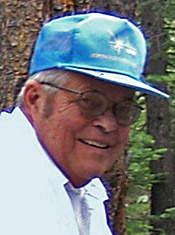 Wally was born October 30, 1941 in New Castle, Neb. to Orville and Lyla Anfinson Birkley. Wally moved with his family to Loveland in 1948. He graduated from Loveland High School in 1960.

On March 14, 1964 Ruby Dreith and Wally Birkley were married in Astoria, Ore.

Wally enlisted in the U. S. Coast Guard in February 1963. Wally was stationed aboard the USCGC Mallow in Astoria, Ore. and Honolulu, Hawaii. Wally was honorably discharged as an E-5 Storekeeper in February 1969, serving 4 years active duty and 2 years in the reserves.

Wally enjoyed fishing, camping, riding his motorcycle, rides in his dune buggy and “Beemer’, and four wheeling. He was also a skilled woodworker. If you showed Wally a picture of something, he could build it. Wally won many blue ribbons at the Larimer County Fair for his woodworking skills on the lathe. Wally built several pieces of furniture for his home and family.

Wally was preceded in death by his parents, in-laws Reuben and Emma Dreith, and a brother-in-law Mike Arndt.

Services will be held Sunday, September 8, 2013, 11:00 a.m. at the family home in Berthoud. In lieu of flowers, the family requests memorial contributions be made to Pathways Hospice or Wounded Warriors, c/o of Viegut Funeral Home. Go to www.viegutfuneralhome.com [1] for condolences.