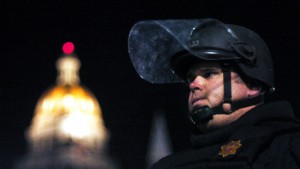 [1]Are we becoming a police state. The scene of armed police in riot gear confronting unarmed protestors of the Occupy Denver protest was a chilling sight. It must have been a frightening experience for the protestors.

Use of government force against protestors is nothing new in the United States. From the Boston Tea Party to Civil Rights Marches to antiwar protests to the Occupy protests of today, protest is a common occurrence in our society.

The use of force against protestors is also common. The Whiskey Rebellion [2] was one of the first protests over taxation and armed forces were sent to deal with the rebellious farmers. In the aftermath of WWI thousands of veterans assembled in Washington DC in the Spring and Summer of 1932, The protesters, known as the Bonus Army [3],  demanded payment for their services. Two veterans were shot and killed by DC police and President Hoover ordered the army to clear the camp. Douglas MacArthur commanded the infantry and cavalry supported by tanks that drove the veterans out. The violence of the Civil Rights Movement is well documented and events such as the Kent State shootings [4] on May 4, 1970 shocked the nation. Protesting and violence are nothing new to the United States. According to Occupy Denver their supporters are still the subject of Denver Police abuse: UPDATE: DPD raids squat, support needed [5]. If this account is true, apparently the First Amendment Constitutional rights of American citizens are not allowed in Denver, perhaps not in Colorado.

In Governor Hickenloopers Defense he was being pressured by a Republican Attorney General and Republican State Senator Greg Brophy READ HERE [6]. It is unlikely that these Republicans would have been so quick to condemn this group if they had been Tea Party Activists.  Robert Bowen in his article “The empire strikes back: Police evict protestors [7],” is sympathetic to the governor.

Senator Brophy referred to them as a bunch of hippies and compared them to drunk drivers. This is not unusual. Liberal blogger David Pakman wrote in this month’s column that the mainstream media, beholden to the corporate interests for advertising, do not give much favorable coverage to “anti-corporate” protestors. It is not until they can be reported on in a way that reflects unfavorably that the mainstream media gets involved. Read Pacmans column The media knowledge gap. [8]

A Google search confirms Pacman’s observations, most of the hits contain negative comments and The Rasmussen Report survey shows most of its respondents see the Occupy movement in a negative way.

What are the protestors upset about?  High unemployment at a time when corporate profits are at an all time high and wages as a percent of the economy are at an all-time low.  See the charts that explain the anger at “Here Are The Four Charts That Explain What The Protestors Are Angry About…” [9]  Apparently that is not enough for the corporate moguls as they want to be freed of all regulation so that they can make even more profit while being able to pollute the earth without being fettered by organizations like the EPA. Does anyone remember Love Canal? Is that what we want to go back to?

The conservatives decry the protestors as ignorant and greedy when it has been greed by the moneyed class that has gotten us into this mess. Read “Meltdown” [10] to see who and what. The Tea Party and its pandering candidates seem to want to do away with the middle class and for good measure, the unions. It was, after all, the unions that created the middle class by demanding a reasonable share of the profits made from their labor. The odd thing about the corporate benefactors of our politicians, is that they do not realize that the middle class is also the consumer who buys the products and services that create the wealth for them. If you don’t believe that, then you should visit a country like Ecuador where there is only a small middle class. With no middle class, there is only a small market for products. With no market there are no profits and the downward spiral will continue and everyone, including the 1%, lose.

Will the ‘Occupy” movement be sustainable. Only time will tell but for the present it is growing as seen in “Occupy Wall Street goes global.” [11]

The Occupy Denver movement vows to continue with a march this Saturday. Details are available at occupydenver.org [12]. If you want to help and support the protest, look at their Needs and Requests [13] page.