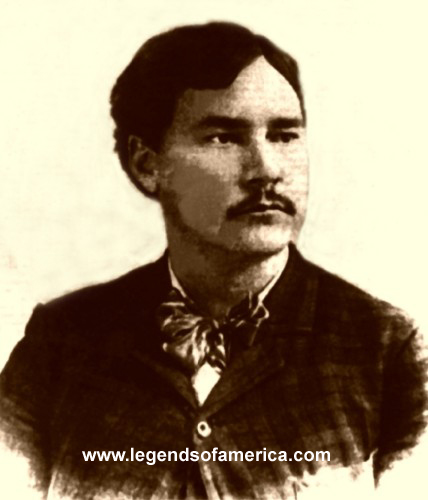 Elfego Baca, legendary defender of southwestern Hispanos, manages to hold off a gang of 80 cowboys who are determined to kill him.

The trouble began the previous day, when Baca arrested Charles McCarthy, a cowboy who fired five shots at him in a Frisco (now Reserve), New Mexico, saloon. For months, a vicious band of Texan cowboys had terrorized the Hispanos of Frisco, brutally castrating one young Mexican man and using another for target practice. Outraged by these abuses, Baca gained a commission as deputy sheriff to try to end the terror. His arrest of McCarthy served notice to other Anglo cowboys that further abuses of the Hispanos would not be tolerated.

The Texans, however, were not easily intimidated. The morning after McCarthy’s arrest, a group of about 80 cowboys rode into town to free McCarthy and make an example of Baca for all Mexicans. Baca gathered the women and children of the town in a church for their safety and prepared to make a stand. When he saw how outnumbered he was, Baca retreated to an adobe house, where he killed one attacker and wounded several others. The irate cowboys peppered Baca’s tiny hideout with bullets, firing about 400 rounds into the flimsy structure. As night fell, they assumed they had killed the defiant deputy sheriff, but the next morning they awoke to the smell of beef stew and tortillas–Baca was fixing his breakfast.

A short while later, two lawmen and several of Baca’s friends came to his aid, and the cowboys retreated. Baca turned himself over to the officers, and he was charged with the murder of one of the cowboys. In his trial in Albuquerque, the jury found Baca not guilty because he had acted in self-defense, and he was released to a hero’s welcome among the Hispanos of New Mexico. Baca was adored because he had taken a stand against the abusive and racist Anglo newcomers. Hugely popular, Baca later enjoyed a successful career as a lawyer, private detective, and politician in Albuquerque.

For a more detailed history of this event visit Legends of America: Elfego Baca & The ‘Frisco War'” [1]