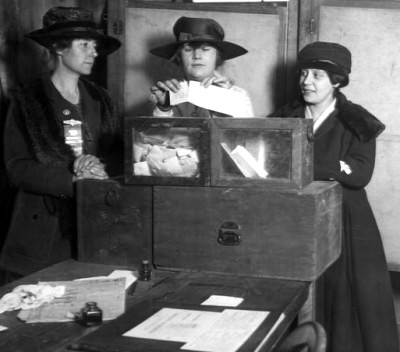 [1]
"Why Women Should Vote." It was not easy, click photo to read the story

Motivated more by interest in free publicity than a commitment to gender equality, Wyoming territorial legislators pass a bill that is signed into law granting women the right to vote.

Western states led the nation in approving women’s suffrage, but some of them had rather unsavory motives. Though some men recognized the important role women played in frontier settlement, others voted for women’s suffrage only to bolster the strength of conservative voting blocks. In Wyoming, some men were also motivated by sheer loneliness–in 1869, the territory had over 6,000 adult males and only 1,000 females, and area men hoped women would be more likely to settle in the rugged and isolated country if they were granted the right to vote.

Some of the suffrage movement’s leaders did have more respectable reasons for supporting women’s right to vote. William Bright, a territorial legislator who was in his mid-forties, had a persuasive young wife who convinced him that denying women the vote was a gross injustice. The other major backer, Edward M. Lee, the territorial secretary who had championed the cause for years, argued that it was unfair for his mother to be denied a privilege granted to African-American males.

Ultimately, though, appeals to justice and equality did not pass the legislation–most Wyoming legislators supported Bright and Lee’s bill because they thought it would win the territory free national publicity and might attract more single marriageable women to the region. Territorial Governor John A. Campbell appreciated the publicity power of the policy and signed the bill into law, making Wyoming the first territory or state in the history of the nation to grant women this fundamental right of citizenship.

Not until 1920 did all women in the United States get the right to vote: The 19th Amendment [4]