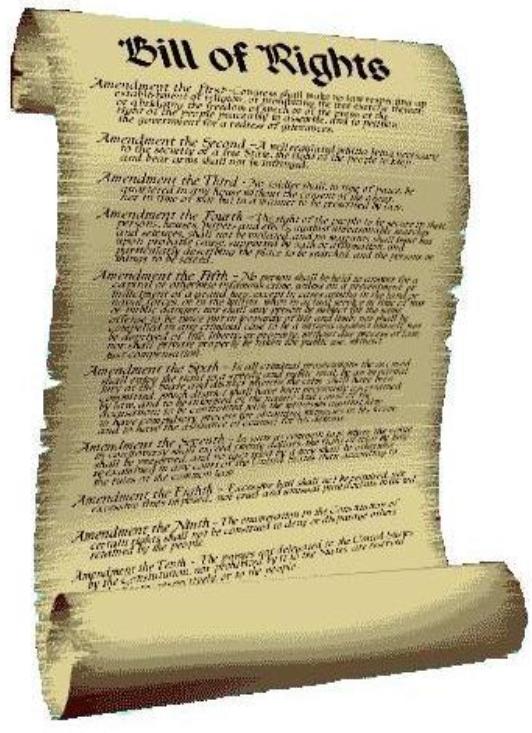 The Bill of Rights becomes law

On this day in 1791, Virginia becomes the last state to ratify the Bill of Rights, making the first ten amendments to the Constitution law and completing the revolutionary reforms begun by the Declaration of Independence. Before the Massachusetts ratifying convention would accept the Constitution, which they finally did in February 1788, the document’s Federalist supporters had to promise to create a Bill of Rights to be amended to the Constitution immediately upon the creation of a new government under the document.
The Anti-Federalist critics of the document, who were afraid that a too-strong federal government would become just another sort of the monarchical regime from which they had recently been freed, believed that the Constitution gave too much power to the federal government by outlining its rights but failing to delineate the rights of the individuals living under it. The promise of a Bill of Rights to do just that helped to assuage the Anti-Federalists’ concerns.
The newly elected Congress drafted the Bill of Rights on December 25, 1789. Virginia’s ratification on this day in 1791 created the three-fourths majority necessary for the ten amendments to become law. Drafted by James Madison and loosely based on Virginia’s Declaration of Rights, the first ten amendments give the following rights to all United States citizens:
1.Freedom of religion, speech and assembly
2.Right to keep and bear arms for the purpose of a well-regulated militia
3.No forcible quartering of soldiers during peacetime
4.Freedom from unreasonable search and seizure
5.Right to a grand jury for capital crimes and due process. Protection from double jeopardy, self-incrimination and public confiscation of private property without just compensation.
6.Right to speedy and public trial by jury and a competent defense
7.Right to trial by jury for monetary cases above $20
8.Protection against excessive bail or fines and cruel and unusual punishments
9.Rights not enumerated are retained by the people
10.Rights not given to the federal government or prohibited the state governments by the Constitution, are reserved to the States… or to the people
For more events of the day, visit History.com [2]