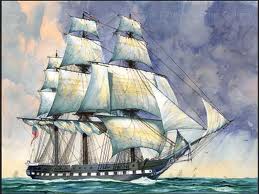 On Friday, December 22, 1775, the Continental Congress creates a Continental Navy, naming Esek Hopkins, Esq., as commander in chief of the fleet.
Congress also named four captains to the new service: Dudley Saltonstall, Abraham Whipple, Nicholas Biddle and John Burrows Hopkins. Their respective vessels, the Alfred, Columbus, Andrew Doria and Cabot, became the first ships of the Navy’s fleet. Five first lieutenants, including future American hero John Paul Jones, five second lieutenants, and three third lieutenants also received their commissions.
The new Admiral Hopkins, as he was dubbed by George Washington, was a Rhode Islander of some standing. His brother was Stephen Hopkins, the state’s governor. Esek Hopkins had married well and used his wife’s fortune to buy a ship. It proved a wise investment. He added to his wealth working as a privateer during the Seven Years’ War. In his new position, Congress promised to pay him 125 dollars per calendar month; they also informed that he could look forward to some share of the prizes allotted to the captors. Christopher Gadsden of South Carolina designed Hopkins’ personal standard, which flew from the first navy fleet. The yellow flag bore the image of a coiled snake and the Patriot motto, Don’t Tread on Me.
Hopkins’ first assignment was to assess the feasibility of an attack on British naval forces in the Chesapeake Bay. After sailing south with his meager force of eight ships, Hopkins decided that victory in such an encounter was impossible. He sailed to the Bahamas instead, where he attacked the British port of Nassau, a decision for which he was relieved of his command upon returning to the continent.
Read more events of this day at History.com [2]
To learn more about the Navy, visit Naval History & Heritage [3]