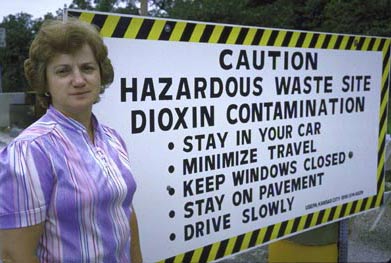 On this day in 1982, the Missouri [2] Department of Health and the federal Centers for Disease Control (CDC) inform residents of Times Beach, Missouri that their town was contaminated when the chemical dioxin was sprayed on its unpaved roads, and that the town will have to be evacuated and demolished. By February, the federal and state governments had spent $36 million to buy every house in town except one (its owners, lifelong residents of Times Beach, refused to sell). In 1985, the city was officially disincorporated.

Times Beach was founded in 1925 as a part of a newspaper promotion: A 6-month subscription to The St. Louis Times plus an extra $67.50 bought a 20-by-100–foot lot along an unsettled stretch of the Meremec River. The town never became the booming resort that the newspaper had intended; instead, it evolved into a lower-middle–class hamlet of about 2,000 people. It was located just off Route 66, a two-lane highway that ran from Chicago [3] to Los Angeles [4] and was once was one of the major routes across the American Southwest.

Unfortunately, Times Beach never had the money to pave its roads, and all the dust kicked up by cars and trucks was a real nuisance. In 1972, town officials thought they’d found a perfect solution to the problem: they paid local waste-hauler Russell Bliss just 6 cents per gallon to spray its roads with oil, theoretically gluing the dust to the ground.

Bliss got the oil for free the year before, when a chemical manufacturer that had made most of its money selling napalm to the military paid him to get rid of its waste materials. He mixed six truckloads of that waste–which turned out to be hexachlorophene tainted with dioxin, a dangerous chemical that, once absorbed, can remain in the human body for more than 10 years–with a tankful of used motor oil. Next, he sprayed this carcinogenic cocktail all over town.

The children of Times Beach loved sliding around in Bliss’ purple-tinted goo, and no one gave the substance a second thought until animals (particularly horses, who had contact with Bliss-sprayed roads and barn floors and riding rings every day, all year round) started dropping dead. Soon people started to get sick, too. In 1979, the EPA came to town and took soil samples, and in 1982 the agency announced that the levels of dioxin–“the most potent cancer-causing agent made by man,” the newspaper said–in Times Beach were off the charts. The agency evacuated the town just after Christmas [5]. In all, the agency spent $250 million and incinerated 265,000 tons of dioxin-tainted soil.

In 1999, the bulldozed and cleaned-up Times Beach reopened as the Route 66 State Park.

Click on the photo above to read “The Times Beach Story” by Marilyn Leistner, the last mayor of Times Beach.

The environment belongs to all of us, visit the Environmental Defense Fund [9] or Sierra Club [10] to see how you can help preserve the world we live in.

For more events of the day, visit History.com [11]