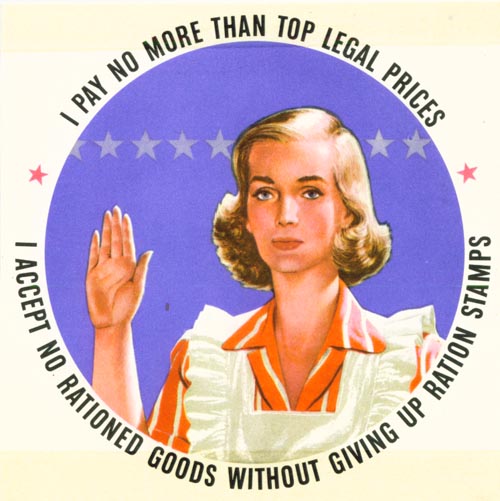 On this day in 1941, the federal Office of Price Administration initiates its first rationing program in support of the American effort in World War II: It mandates that from that day on, no driver will be permitted to own more than five automobile tires.

President Roosevelt established the Office of Price Administration and Civilian Supply in April 1941 to “stabilize prices and rents and prevent unwarranted increases in them; to prevent profiteering, hoarding and speculation; to assure that defense appropriations were not dissipated by excessive prices; to protect those with fixed incomes from undue impairment of their living standards; to assist in securing adequate production; and to prevent a post-emergency collapse of values.” The OPA (its name was streamlined in August 1941) was responsible for two types of rationing programs. The first limited the purchase of certain commodities (tires, cars, metal typewriters, bicycles, stoves and rubber shoes) to people who had demonstrated an especial need for them. The second limited the quantity of things–like butter, coffee, sugar, cooking fat, gasoline and non-rubber shoes–which every citizen was allowed to buy. (As a result, of course, the black market flourished–studies estimated that 25 percent of all purchases during the war were illegal.)

Japanese occupations in the Far East had made it impossible to get rubber from plantations in the Dutch East Indies, and what little rubber was available went straight to airplane and munitions factories. Because no one had yet figured out how to make really high-quality artificial rubber, the OPA especially wanted to encourage people to care for the automobile tires they already had. Ads urged people to put less wear on their tires by driving in carpools. (“When You Ride Alone You Ride With Hitler!” said one poster; another announced, “To win this war…more people have got to enjoy riding in fewer cars.”) To conserve rubber (and gasoline), the national “Victory Speed Limit” was 35 miles per hour. Meanwhile, scrap-rubber drives collected old raincoats, garden hoses and bathing caps.

Rationing and recycling–collecting items like tin cans and used cooking fat for reuse–was a way to make ordinary citizens feel like they were part of what one ad called a “fighting unit on the home front.” During the war, the OPA rationed almost every commodity it could think of, but by the end of 1945 only two rationing programs–for sugar and for rubber tires–remained in place. Tire rationing finally ended on December 31, 1945.

For more events of the day, visit History.com [2]

Unlike the present, everyone sacrificed for the war effort in the 1940s. Read more about rationing here, Rationing on the U.S. Homefront [3]