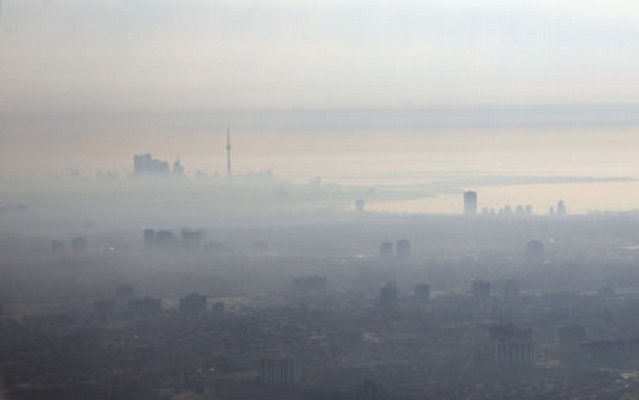 Heavy smog begins to hover over London, England, on this day in 1952. It persists for four days, leading to the deaths of at least 4,000 people.

It was a Thursday afternoon when a high-pressure air mass stalled over the Thames River Valley. When cold air arrived suddenly from the west, the air over London became trapped in place. The problem was exacerbated by low temperatures, which caused residents to burn extra coal in their furnaces. The smoke, soot and sulfur dioxide from the area’s industries along with that from cars and consumer energy usage caused extraordinarily heavy smog to smother the city. By the morning of December 5, there was a visible pall cast over hundreds of square miles.

[2]The smog became so thick and dense that by December 7 there was virtually no sunlight and visibility was reduced to five yards in many places. Eventually, all transportation in the region was halted, but not before the smog caused several rail accidents, including a collision between two trains near London Bridge. The worst effect of the smog, however, was the respiratory distress it caused in humans and animals, including difficulty breathing and the vomiting of phlegm. One of the first noted victims was a prize cow that suffocated on December 5. An unusually high number of people in the area, numbering in the thousands, died in their sleep that weekend.

It is difficult to calculate exactly how many deaths and injuries were caused by the smog. As with heat waves, experts compare death totals during the smog to the number of people who have died during the same period in previous years. The period between December 4 and December 8 saw such a marked increase in death in the London metropolitan area that the most conservative estimates place the death toll at 4,000, with some estimating that the smog killed as many as 8,000 people.

On December 9, the smog finally blew away. In the aftermath of this incident, the British government passed more stringent regulations on air pollution and encouraged people to stop using coal to hear their homes. Despite these measures, a similar smog 10 years later killed approximately 100 Londoners.

For more on this day in History, visit History.com [3]