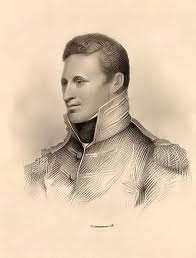 Approaching the Colorado foothills of the Rocky Mountains during his second exploratory expedition, Lieutenant Zebulon Pike spots a distant mountain peak that looks “like a small blue cloud.” The mountain was later named Pike’s Peak in his honor.

Pike’s explorations of the newly acquired Louisiana Territory of the United States began before the nation’s first western explorers, Lewis and Clark, had returned from their own expedition up the Missouri River. Pike was more of a professional military man than either Lewis or Clark, and he was a smart man who had taught himself Spanish, French, mathematics, and elementary science. When the governor of Louisiana Territory requested a military expedition to explore the headwaters of the Mississippi, General James Wilkinson picked Pike to lead it.

Although Pike’s first western expedition was only moderately successful, Wilkinson picked him to lead a second mission in July 1806 to explore the headwaters of the Red and Arkansas Rivers. This route took Pike across present-day Kansas and into the high plains region that would later become the state of Colorado. When Pike first saw the peak that would later bear his name, he grossly underestimated its height and its distance, never having seen mountains the size of the Rockies. He told his men they should be able to walk to the peak, climb it, and return before dinner. Pike and his men struggled through snow and sub-zero temperatures before finally taking shelter in a cave for the night, without even having reached the base of the towering mountain. Pike later pronounced the peak impossible to scale.

The remainder of Pike’s expedition was equally trying. After attempting for several months to locate the Red River, Pike and his men became hopelessly lost. A troop of Spanish soldiers saved the mission when they arrested Pike and his men. The soldiers escorted them to Santa Fe, thus providing Pike with an invaluable tour of that strategically important region, courtesy of the Spanish military.

After returning to the United States, Pike wrote a poorly organized account of his expedition that won him some fame, but little money. Still, in recognition of his bravery and leadership during the western expeditions, the army appointed him a brigadier general during the War of 1812. He was killed in an explosion during the April 1813 assault on Toronto.

Pike named the peak “Grand Peak” and so it was known until the gold rush days when “Piks Peak or bust” became the slogan for gold seekers.

“…here we found the snow middle deep; no sign of beast or bird inhabiting this region. The thermometer which stood at 9° above 0 at the foot of the mountain, here fell to 4° below 0. The summit of the Grand Peak, which was entirely bare of vegetation and covered with snow, now appeared at the distance of 15 or 16 miles (26 km) [24–26 km] from us, and as high again as what we had ascended, and would have taken a whole day’s march to have arrived at its base, when I believed no human being could have ascended to its pinical [sic]. This with the condition of my soldiers who had only light overalls on, and no stockings, and every way ill provided to endure the inclemency of the region; the bad prospect of killing any thing to subsist on, with the further detention of two or three days, which it must occasion, determined us to return.”

For more about the history of the mountain, visit Wikipedia [2]

The purpose behind the the Pike expedition and the motives of the James Wilkinson, the man who directed the trip have been quite controversial. The fascinating story is covered in the Gale Encyclopedia of Biography: Zebulon Pike [3] at Answers.com

For a short bio on James Wilkinson visit PBS:The Duel [4] to learn about his career and association with American traitor Aaron Burr.