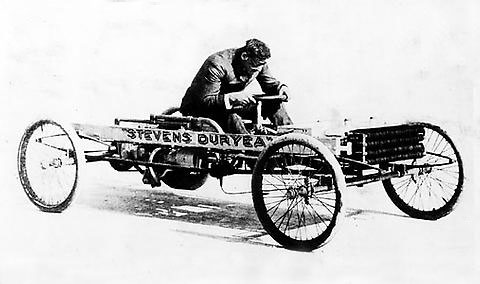 On November 28, 1895, Frank Duryea wins the first motor-car race in the United States, a 54-mile loop along the lakeshore from Chicago to Waukegan and back again. The race was a harrowing one–It was held during one of Chicago’s great snowstorms, and the contestants’ cars got stuck in snowdrifts, slid into other vehicles and stalled repeatedly. Duryea, who completed the race in 10 hours and 23 minutes, traveled at an average speed of 5 1/4 miles per hour.

The world’s first “moto-cycle” race, an 80-mile jaunt from Paris to Rouen in July 1894, had clearly demonstrated the merits of the Daimler gasoline motor–though 12 of the 46 cars that started the race were steam-powered, none of the finishers were–and had generated a great deal of publicity for the horseless carriage. Herman H. Kohlstaat, the publisher of the Chicago Times-Herald and a tireless booster of the newfangled automotive technology, decided to drum up interest in the motor wagon by sponsoring a similar race. More than 80 people entered, most of whom were building their own cars at home; as a result, the event had to be postponed twice because the vast majority of the racers weren’t yet ready. Only two people made it to an exhibition race at the beginning of November: Frank Duryea of Massachusetts, driving a “buggyaut” that his brother Charles had designed, and Oscar Mueller of Chicago, driving his father’s imported Benz. (Mueller won the race; Duryea had swerved to avoid a farmer’s wagon and had fallen into a ditch.)

On the morning of November 28, six inches of snow covered the race-course. A horse-drawn snowplow inched along ineffectually. Because of the bad weather, only six of 89 racers had made it to the starting line: Duryea; Mueller; a Benz sponsored by Macy’s that, the store hoped, would help it to advertise the cars it had begun to sell; a Benz sponsored by the De La Vergne Refrigeration Company of New York; and two electric cars whose batteries died almost immediately.

Ten hours and 23 minutes after the race began, the Duryea wagon sputtered across the finish line. Meanwhile, according to news accounts, the Mueller moto-cycle “puffed its way slowly and laboriously along, its pneumatic tires wrapped with twine to keep them from slipping, and one of its operators sanding the belt on the motor for the same reason.” It crossed the finish line an hour and a half after Duryea had–though Mueller himself, who had fainted from all the excitement, was no longer at the wheel. The Macy’s Benz was perhaps the most hapless racer of all: It collided with a streetcar on the way to Evanston and with a sleigh and then a hack on the way back, and never did finish. Neither did the De La Vergne Benz.

But the race had accomplished what Kohlstaadt had hoped it would: It introduced Americans to the motor-wagon and proved once and for all that the days of the horse and buggy were numbered. For his part, Frank Duryea returned to his shop in Massachusetts and got to work. In 1896, the Duryeas built 13 cars by hand–and thus they became the largest automobile factory in the United States.