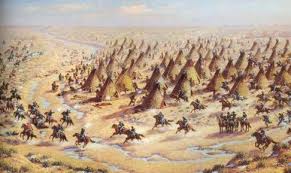 Colonel John Chivington and his Colorado volunteers massacre a peaceful village of Cheyenne camped near Sand Creek in Colorado Territory, setting off a long series of bloody retaliatory attacks by Indians.

Chivington, a former Methodist preacher with ambitions to become a territorial delegate to Congress, saw in the Indian wars an opportunity to gain the esteem he would need to win a government office. Disappointed that the spring of 1864 failed to produce any major battles, Chivington apparently determined to burn villages and kill Cheyenne whenever and wherever he could, making little distinction between peaceful or aggressive bands. Angered by frequent Indian attacks on settlers and the theft of their horses and cattle, many Colorado settlers supported Chivington’s methods, and a number of men volunteered to join his forces on hundred-day enlistments, forming the 3rd Colorado Volunteers.

Fearing that U.S. troops might mistakenly identify his band of peaceful Cheyenne as having participated in the attacks on settlers, Chief Black Kettle traveled to Denver under escort of U.S. Army Major Edward Wynkoop to affirm his non-hostile intentions. Chivington and the territorial governor of Colorado clearly did not want peace, yet they could not openly reject the overtures of Black Kettle. Believing that he had a promise of safety if he brought his people into Fort Lyon, Black Kettle lead the band of Cheyenne to a spot designated by Major Wynkoop near the fort along a small stream known as Sand Creek. The tribe flew an American flag and a white flag at the camp to indicate their alliance with the U.S. and alert all to their generally peaceful intentions.

Determined to have his glorious battle, Chivington refused to recognize that Black Kettle’s settlement was peaceful. At daybreak, Chivington and his 700 volunteers, many of them drunk, attacked the sleeping village at Sand Creek. Most of the Cheyenne men were away hunting, so the women, children, and elders were largely defenseless. In the frenzied slaughter that followed, Chivington and his men killed more than 100 women and children and 28 men. Black Kettle escaped the attack. The soldiers scalped and mutilated the corpses, hacking off body parts that included male and female genitals, and then returned to Denver where they displayed the scalps to approving crowds during intermission at a downtown theatre.

Because of Chivington’s depraved slaughter, the central plains exploded with retaliatory attacks from Cheyenne, Sioux, and Arapaho Indians. Fortunately, not everyone applauded Chivington’s behavior–many Americans, particularly in the east, strongly condemned Chivington’s attack and the barbaric mutilations. Subsequent congressional and military investigations denounced Chivington, but claimed they could not punish him because he had resigned from the army and was no longer under military jurisdiction. Nonetheless, Chivington spent the rest of his life trying to escape the stigma of his deplorable behavior at Sand Creek.

For more events of this day, visit History.com [3]

Click on the pictures to learn more about the battle and about Black Kettle.