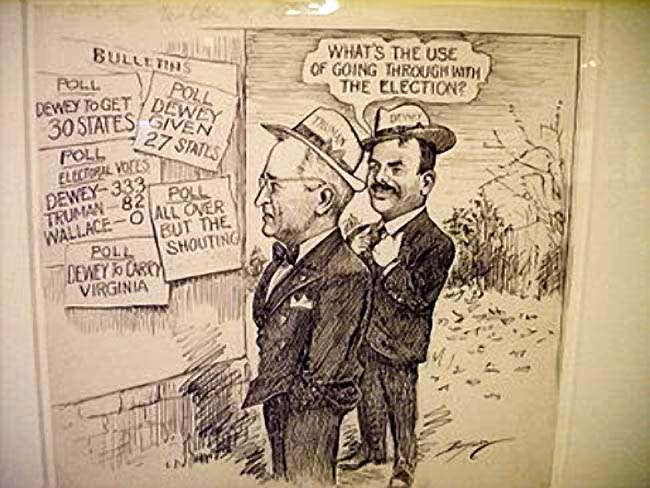 On this day in 1948, the Chicago Tribune jumps the gun and mistakenly declares New York Governor Thomas Dewey the winner of his presidential race with incumbent Harry S. Truman in a front-page headline: “Dewey Defeats Truman.”

Many of America’s major newspapers had predicted a Dewey victory early on in the campaign. A New York Times article editorialized that “if Truman is nominated, he will be forced to wage the loneliest campaign in recent history.” Perhaps not surprisingly then, Truman chose not to use the press as a vehicle for getting his message across. Instead, in July 1948, he embarked on an ambitious 22,000-mile “whistle stop” railroad and automobile campaign tour. At every destination, Truman asked crowds to help him keep his job as president. His eventual success in the election of 1948 has been largely attributed to this direct interaction with the public and his appeal to the common voters as the political “underdog.” At the end of one of his campaign speeches, voices in the crowd could be heard yelling “Give ’em Hell, Harry!” It didn’t take long for the phrase to catch on and become Truman’s unofficial campaign slogan. 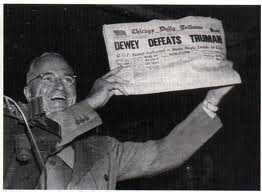 [2]In a now famous photograph snapped in the early morning hours after the election, a beaming and bemused Truman is shown holding aloft the Chicago Tribune issue that had wrongly predicted his political downfall. Truman defeated Dewey by 114 electoral votes.

For this and other November 3 events, go to History.com [3]

More information at Wickipedia: United States presidential election, 1948 [1] shows many similarities to the present campaign, even with the GOP hopefuls still espousing the same goals as the conservatives who opposed Truman.

HistoryBuff.com explains what happened at the Chicago Daily Tribune in the article “The Story Behind ‘Dewey Defeats Truman'” [2]